American food is enjoying somewhat of a boom in Cardiff at the moment with numerous BBQ and burger joints, as well as American slanted street food joints popping up. Some better than other in my view (see my Bigger isn”t always better post).

The latest American restaurant to hit Cardiff is Apple Jacks in the city centre, whose strap line is “diner classics with a deluxe twist” . They are a single site independent rather than part of a chain.

I love diners and diner food which to me is one of the quintiessential American dining experiences and one I always look out for when I am in the States.

The menu is packed with diner classics from across the USA, including clam chowder and Baltimore crabs (East Coast), the delightfully named Hangtown Fry (omelette with oysters and bacon) from the West Coast, tacos from the South West and Po boys (but see later) from the deep South amongst many others. There are of course burgers and the like on the menu to.

with a slightly more sophisticated evening menu taking over from 5pm. 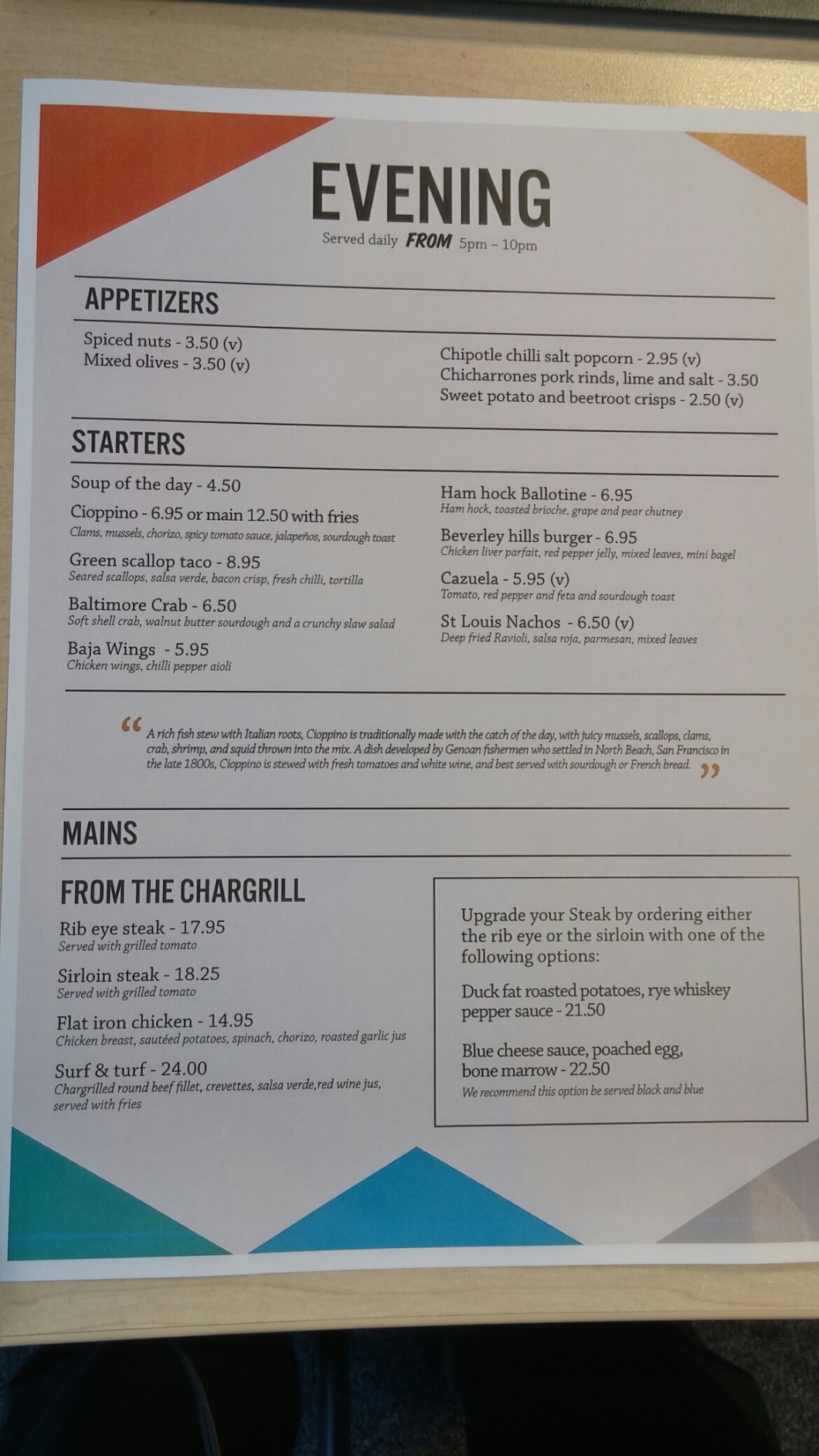 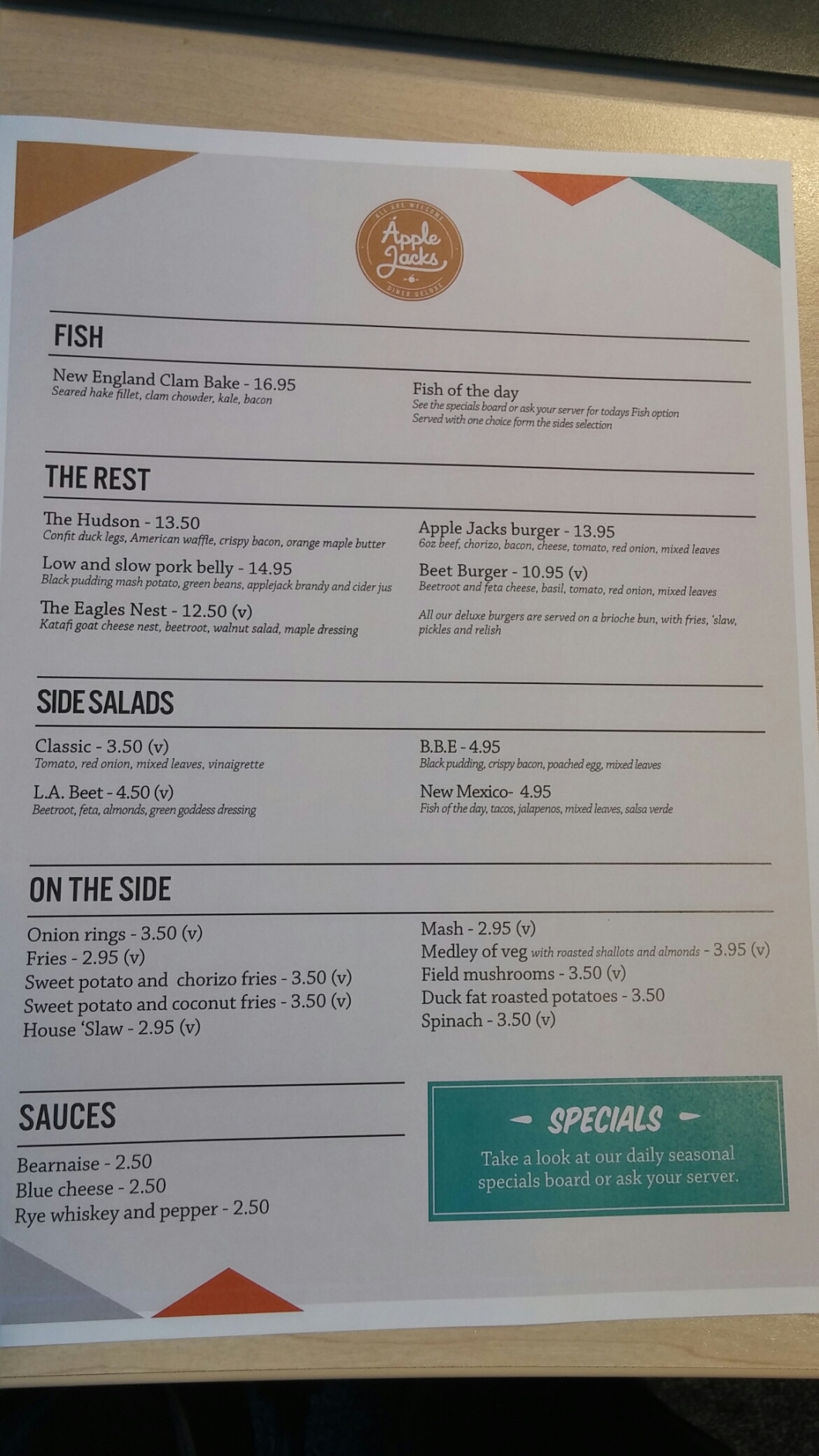 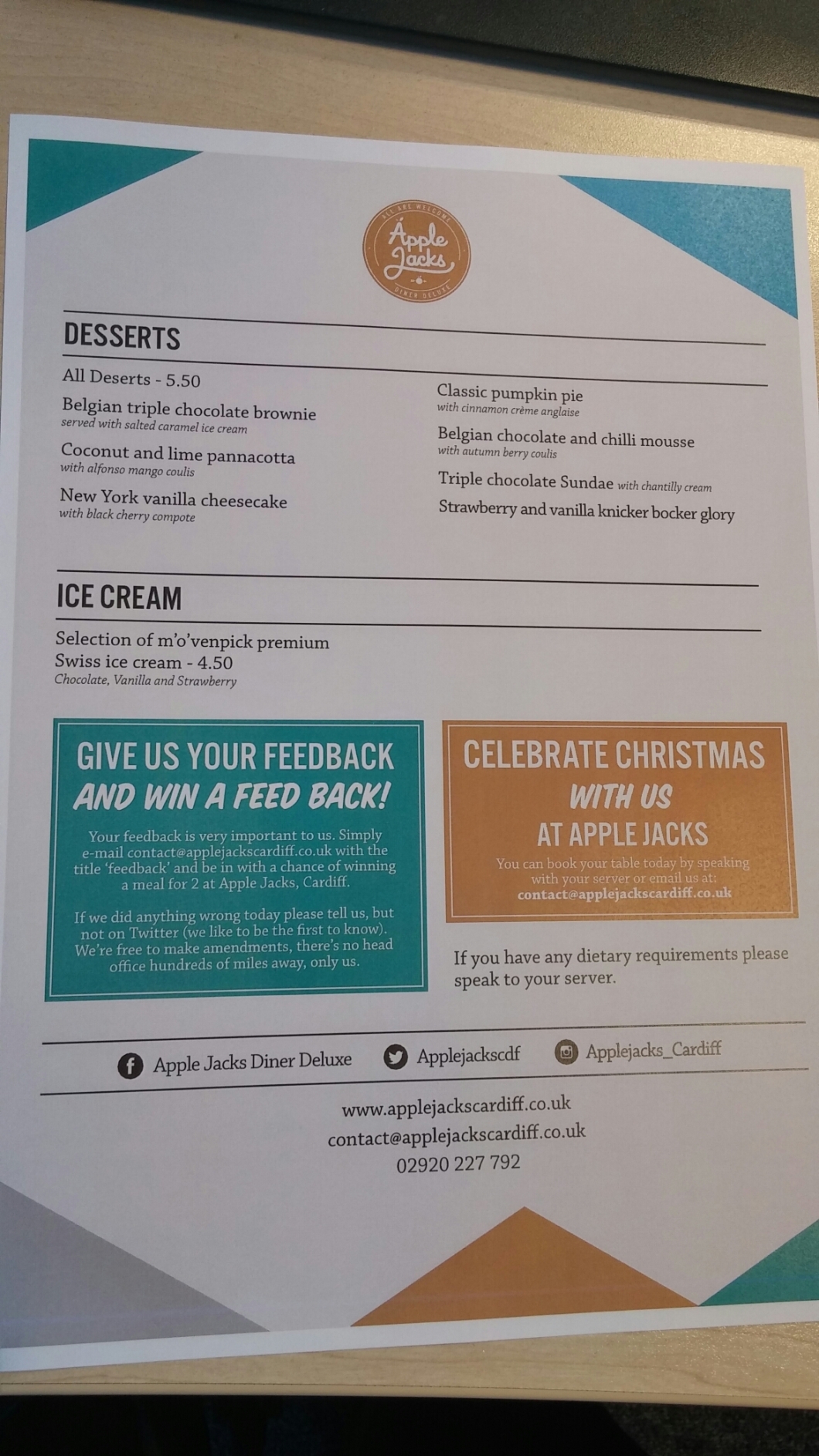 I like the menu which is full of stuff I wanted to order. I especially liked the fact it includes a brief history of some of the potentially more unfamiliar items on it, in the form of the Hangtown Fry and the Cioppino. I love a bit of food trivia me.

I was dining solo (being billy no mates on the day in question in work), but the place is inviting enough and smart phones make eating solo so much easier than it use to be.

It has a pleasant interior, with a prominent centrepiece in the form of VW camper van (which you can actually sit in). Lots of stripped pine makes it more beach front bar than classic 50s dinner in terms of decor. 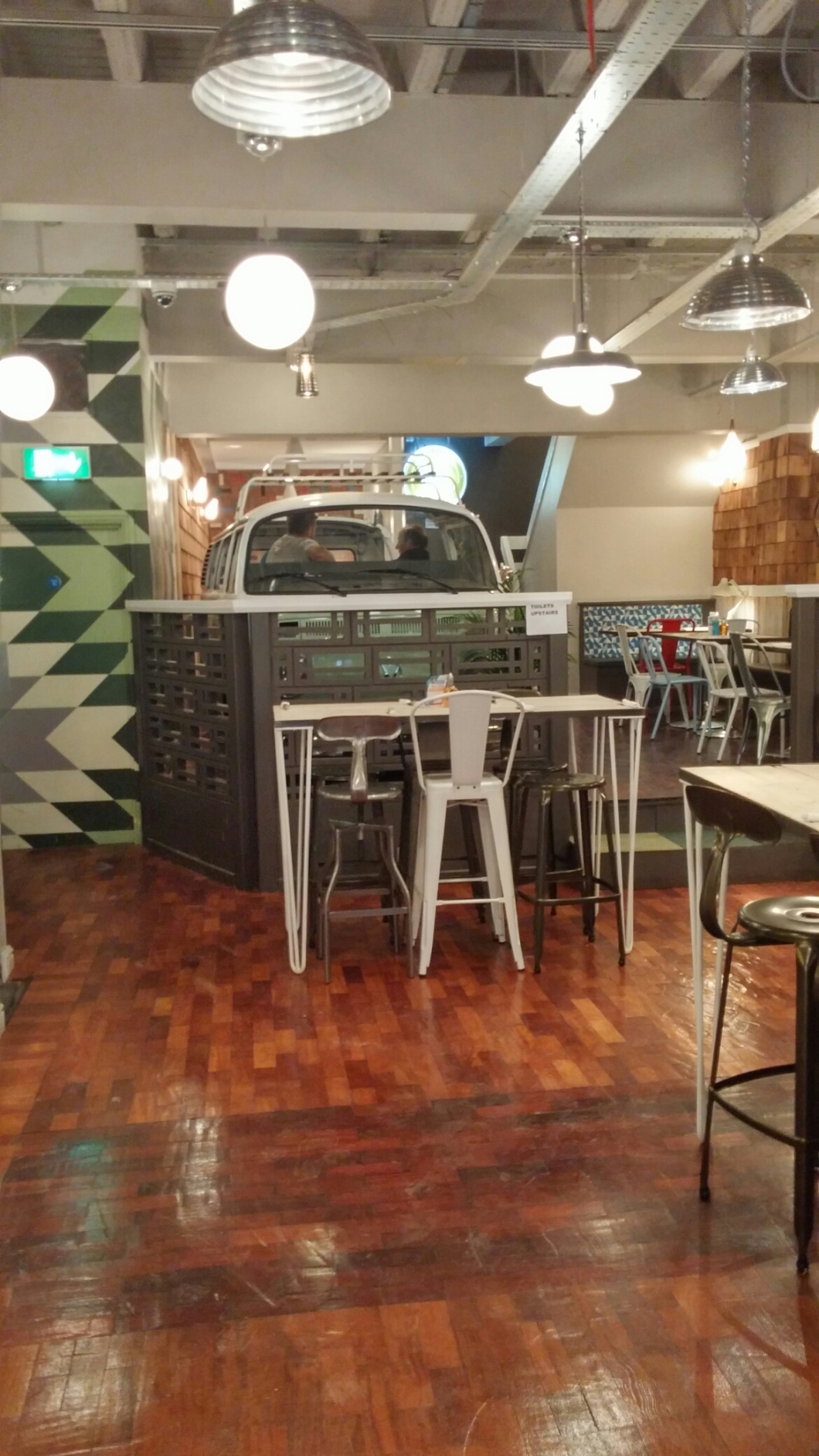 It was quite quiet when I arrived on a rainy lunchtime (a couple of days after they officially opened) but it soon started to fill up. I had to wait a while to be seated (it said wait to be seated, so I did), as there was initially no evidence of any staff (waiting or behind the bar).

A single waitress appeared half a minute or so after I arrived and seated me, giving me a food menu and asking me what I would like to drink.

Somewhat oddly there doesn t seem to be a drinks menu as yet (nothing on the table or the website). I was asked what I would like to drink, to which I responded what have you got? No mention of a drinks menu was made and I stopped her, after she started to reel off a list of soft drinks (mostly the usual suspects), at cranberry juice.

I later overheard the waitress say to another table that there was as yet no drinks menu.

More written information regarding drinks would be an idea. Always nice to now what is on offer (as it is a diner I hope this will include some decent America classic – root beers, shakes floats etc. as well as US craft beers) and at what price they come in at.

On the food front, I decided to go for, that New Orleans classic, the shrimp Po boy. What I got was a perfectly nice sandwich, but it wasn’t a Po boy. 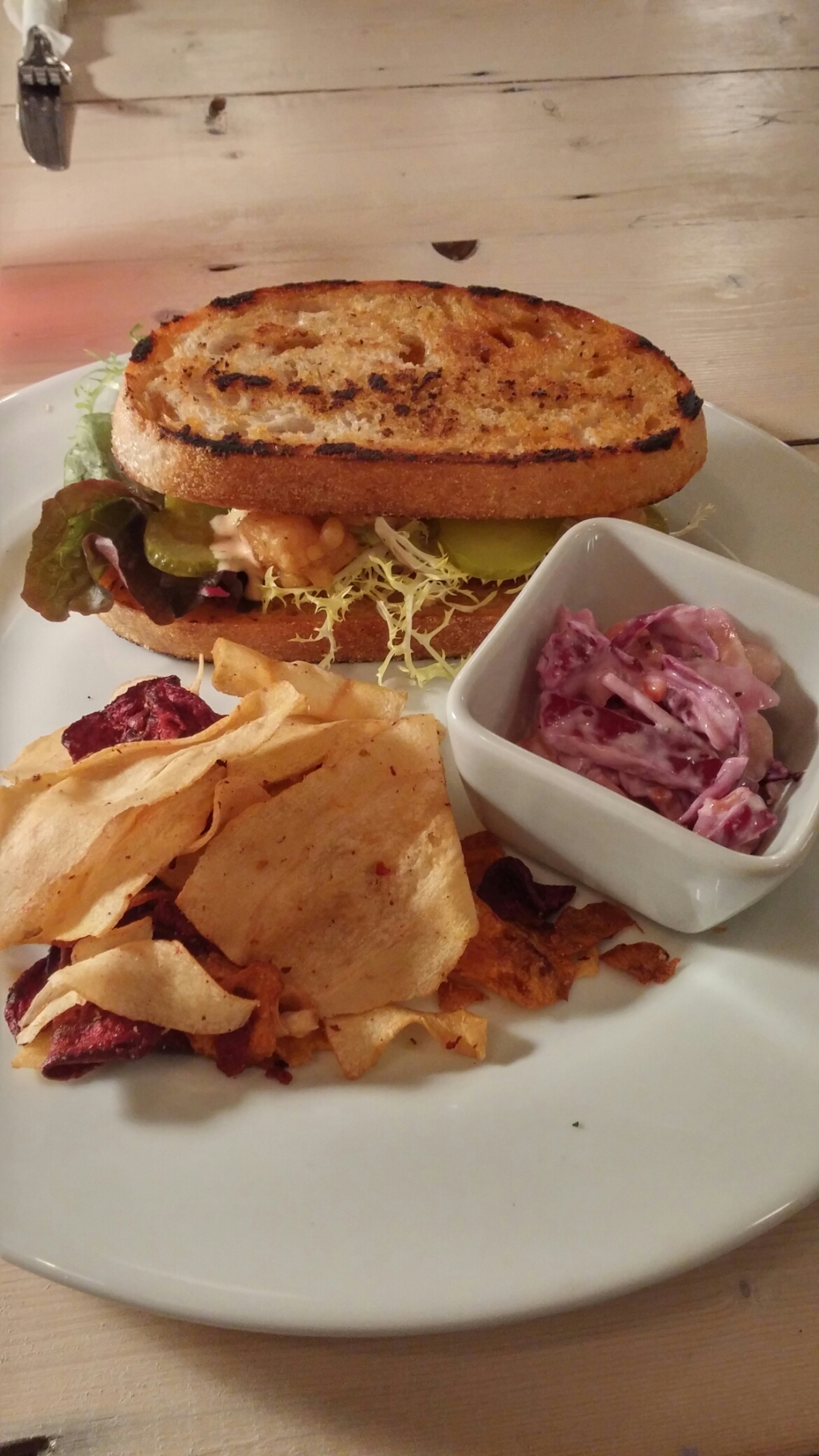 A Po boy to me has to be based on a French bread submarine roll rather than the toasted sliced sourdough (the menu did, on re- reading it, say sourdough) that sandwiched the shrimps (prawns to us in the UK) served up here.

Misdescription aside (at least to me), it was actually quite a good sandwich. The bread had that nice slight chewiness you get from toasted sourdough, with a filling of a not too stingy ( but not exactly US style overflowing) amount of tasty deep fried batter (rather than crumb) coated prawns (with a smidgen, I think, of cayenne in there). These were crisp on the outside, plump and nicely cooked on the inside and had a good flavour to them.

The sandwich came with some nice mixed leaves (much better than boring old iceberg), briney pickles (I love pickles) and a seafood (thousand island based) dressing. The later had a slight sweetness to it presumably as a result of the addition (as stated on the menu) of bourbon to it. It was a good sandwich.

Also on the plate was a small pot of a creamy red cabbage based slaw (nice enough, if a tad too creamy for my taste – I prefer a more vinegary slaw but that is my personal taste) and a good handful of vegetable (sweet potato and beetroot) crisps. These vegetable crisps were a pleasant change from fries and made for a lighter lunch dish.

The total bill came to £8.45 (£6.95 for the sandwich and the drink coming in at a reasonable £1.50 ). It would have been nice to have known the price of the drink before I got the bill mind.

For the price tag, I thought my food and drink was decent value and just right size wise for lunch. Whilst not what I regard as a Po boy, it was tasty and filling so I was happy enough.

Service was friendly and efficient, so no complaints on that front. They did give me the wrong bill and as I didn’t know how much my drink was supposed to be, by raising this, I risked getting a bigger bill (as the food was the same price on both bills). It was thankfully less, so my honesty did pay off.

I hope Apple Jacks succeeds, as it certainly has promise in my view and it is nice to see a new independent in the city centre.

Would I go back? Yes I think so – lots of things of interest on the menu that take my fancy. Was it diner- mite? Well not quite, at least not yet as I would like to try more of the menu, but based on my first visit I rather liked it. Get a drinks menu thought, please.