The price is not quite right at Garlands Eatery and Coffee House, Cardiff

Garlands is a little cafe in one of Cardiff’s rather lovely Victorian arcades (we initially went to the wrong arcade based on my recollection of where it was, despite J saying I was wrong – which I was).

It was recommended to J and I primarily on the basis of the Welsh rarebits on their menu, with their marketing blurb referring to Garlands as the “Home of Speciality Rarebits and Cawl”. A much disputed claim I would imagine. 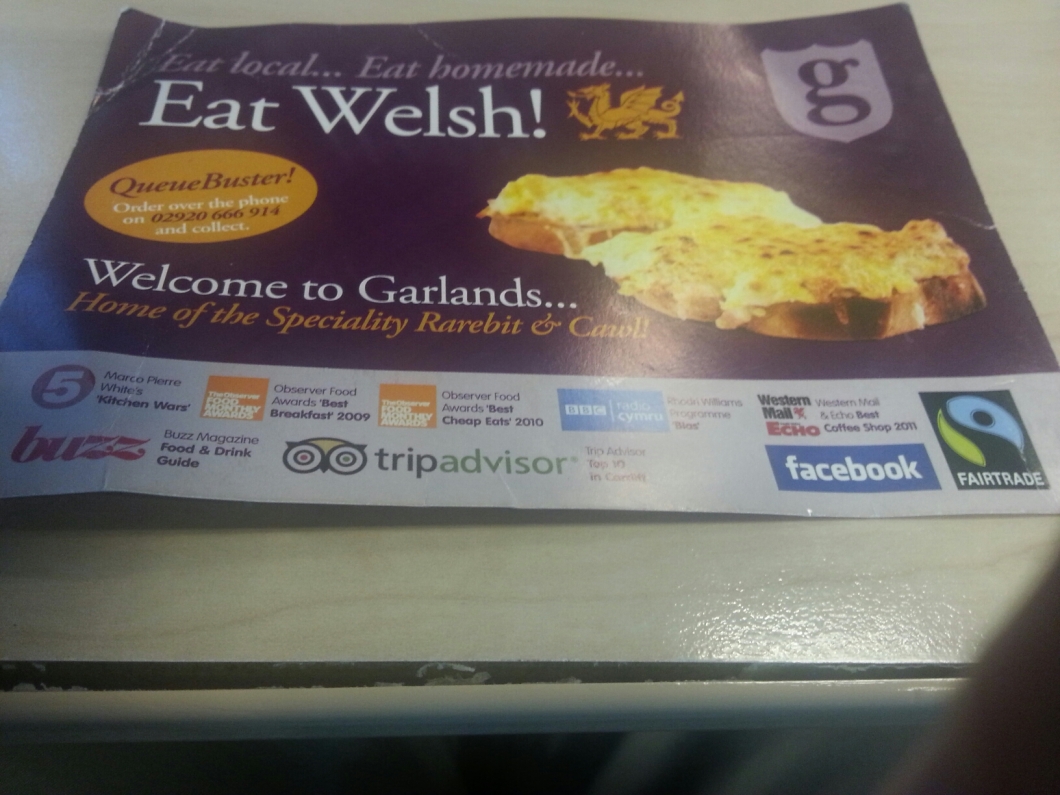 Now I love a bit of cheese on toast, which to me is really what fast food should be all about. A snack that is quick and easy to make and above all tasty.

In the SF household, how to make it is hotly disputed. Mrs.SF prefers a no nonsense approach of grated cheese with a dash of Worcestershire sauce (it never fails to amuse me listening to Americans on TV trying to pronounce this – seems to come out as War – chester – sheer – shire). I, on the other hand, like to add beaten egg, mustard (English), Worcestershire sauce, black pepper and pinch of cayenne to the mix (or as Mrs. SF puts it “being a ponsey git”). This gets a rather more gooey end result than that achieved by Mrs. SF approach.

There seem to be a myriad of recipe options out there, some more sucessful than others. The otherwise rather nice Potted Pig in Cardiff does a truffled version that I am not keen on at all with the truffle (oil) overpowering everything else. A version I saw online involving stout, however, sounded rather splendid (must try that recipe) whereas one using port looked a very alarming colour

On the basis of my love of a good cheese on toast/rarebit , off J and I trundled to Garlands for lunch. 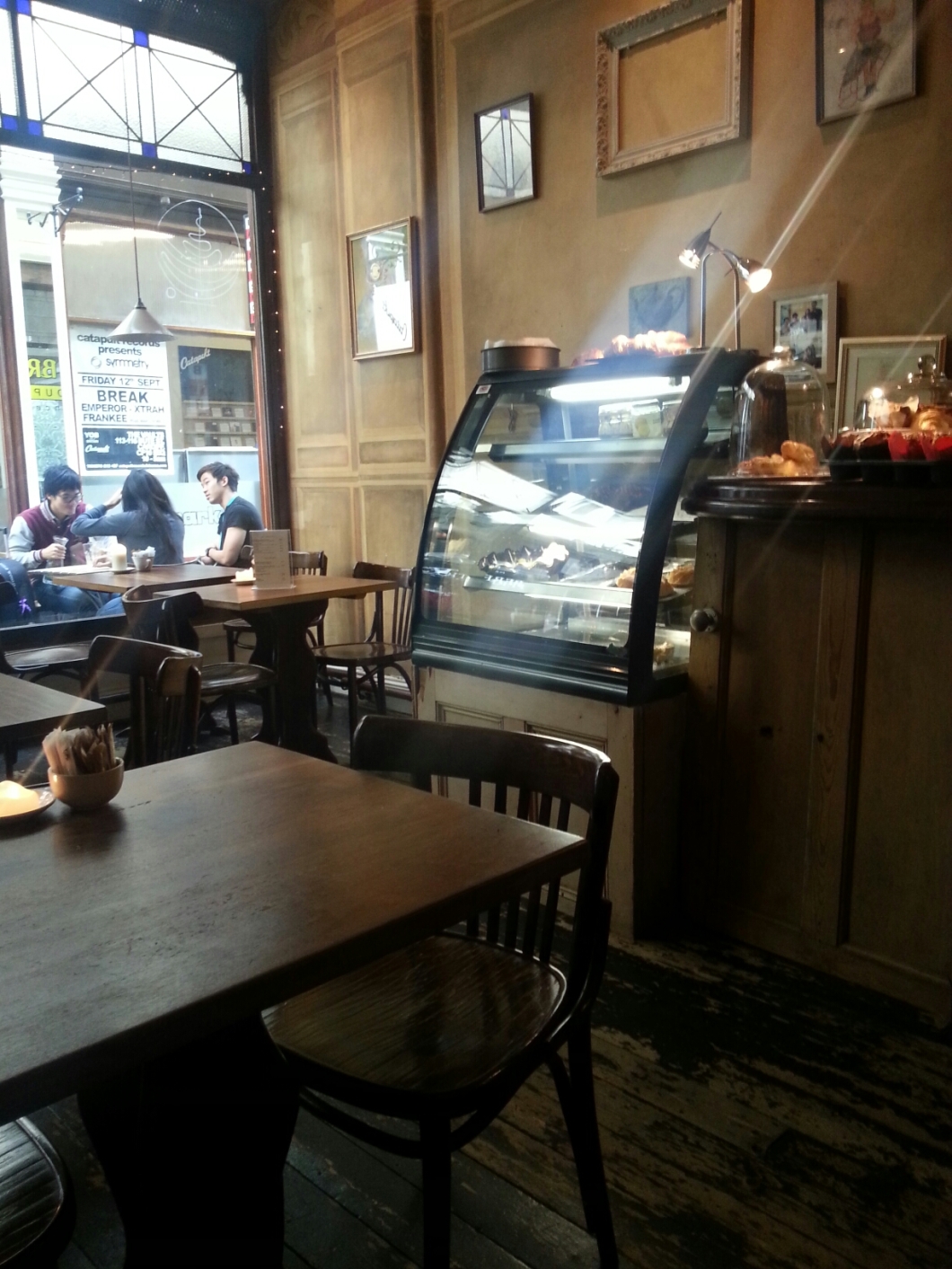 Garlands has on its menu a number of rarebit dishes, which I think could be catagorised (certainly in my mind – feel free to disagree) as the “Good, the Bad, the Ugly and the not sure about that one at all”. These are as follows:

● Traditional Welsh ( with mustard and ale) – the Good
● Mediterranean (with olives, spicy tomato relish and Mediterranean herbs) – the Bad (to me sounds like way to much going on);
● Hawaiian (with ham and pineapple – an abomination on pizza in my opinion and no reason to believed otherwise for a rarebit – actually reading the menu description it sounds sort of OK) – the Ugly; and
● Bloody (bacon and black pudding) – the not sure about that one at all (bacon OK, but black pudding as well hmmm)

Being of an age where I am somewhat set in my ways, unsurprisingly based on my comments above, I went for the traditional large Welsh rarebit (£7.95, small was £6.50). J, still on her weirdo no carbs diet, went for one of the specials in the form of a salmon and advocado tower (£7.00).

My Welsh rarebit when it arrived seemed a bit odd having the look of cheese spread/paste. There was a distinct lack of molten bubbliness to the rarebit and a cursory feel found it to be lukewarm at best. It had very clearly missed its appointment with the grill and was send back.

Lack of heat and cooked cheese does seem to be a recurring theme for me at the moment, with a baked cheese dish served to me by Cafe Brava recently being stone cold. Come on guys it is pretty much a fundamental requirement when dishing up hot food for it to be, well, hot.

My dish going back, left J staring at her Salmon (before she ordered she ascertained it was smoked salmon) and avocado tower. Luckily it was a cold dish so the wait didn’t matter that much. It came with a rather good looking side salad which had some marinated ribbons of courgette in it and a very nice dressing. It was all a bit salad with salad though. 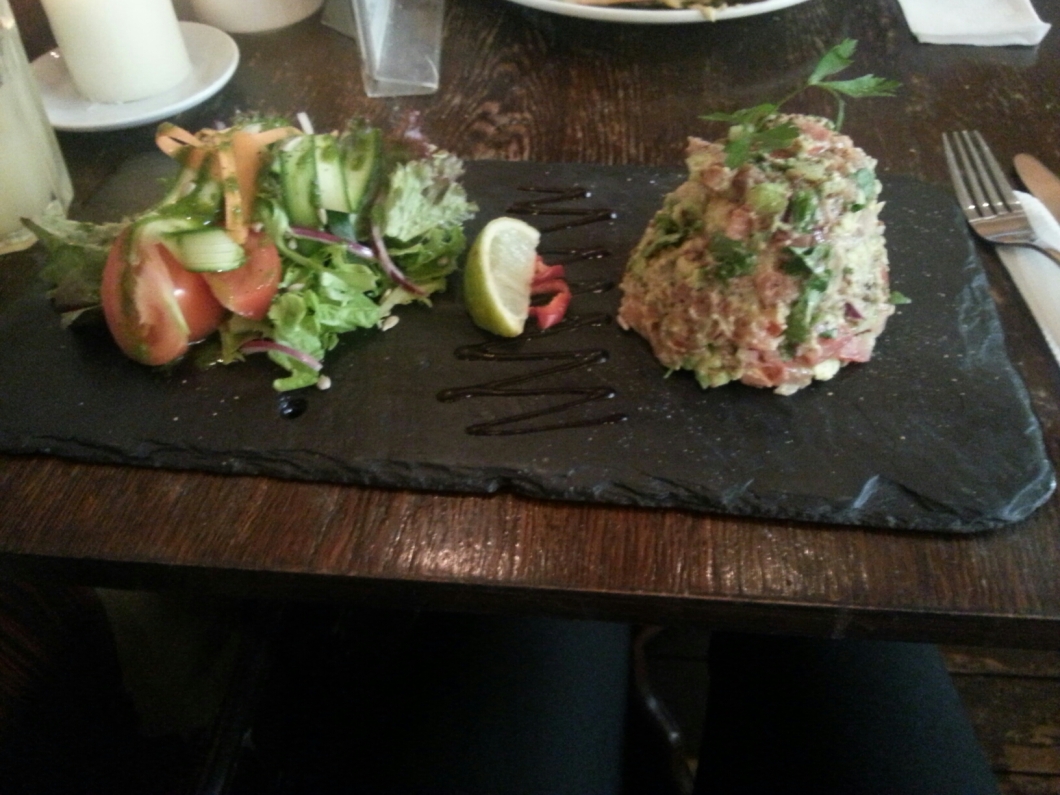 The tower was more a mound, much like the mountain sculpture Richard Dreyfuss’ character builds in his living room in “Close Encounters of the Third Kind”.

J’s view was it was nice enough, but that it got all a bit the samey by the end. She said that as all the components were chopped quite finely there was also a lack of texture to it. I had a taste and saw her point, but thought it tasted quite nice with a good thwack of fresh herbs, decent quality smoked salmon and a nice citrussy dressing. I suspect I would have got bored by the end of what was a big portion though. It also came on a dreaded slate (regular readers will know my view on these in place of proper plates). It was perfectly OK, but the lack of any contrasting textures let it down a bit. Needed something more chunky in it or with a bit of bite to it.

My rarebit reappeared suitably hot (with apologies from the slightly flustered waitress – they were short staffed).

This was a good rarebit, with the rich, tangy, gooey cheese complimented by the addition of mustard and ale (it said it was local ale, but didn’t expand any further) to the mix. It came with a really nice punchy tomato chutney which helped to offset the richness of the cheese. The side salad came with the usual suspects and a good lemoney dressing.

All in all a nice tasty dish, but for 4 smallish triangles the £7.95 price tag seemed a bit steep to me. If they had lopped off £1.50 – £2 from that price tag, I would have been much happier.

Other items on the menu seemed promising including some good looking egg benedicts that passed our table and some imaginatively filled doorstop sarnies (the Ripley – battered soft shell crab – particularly called to me). 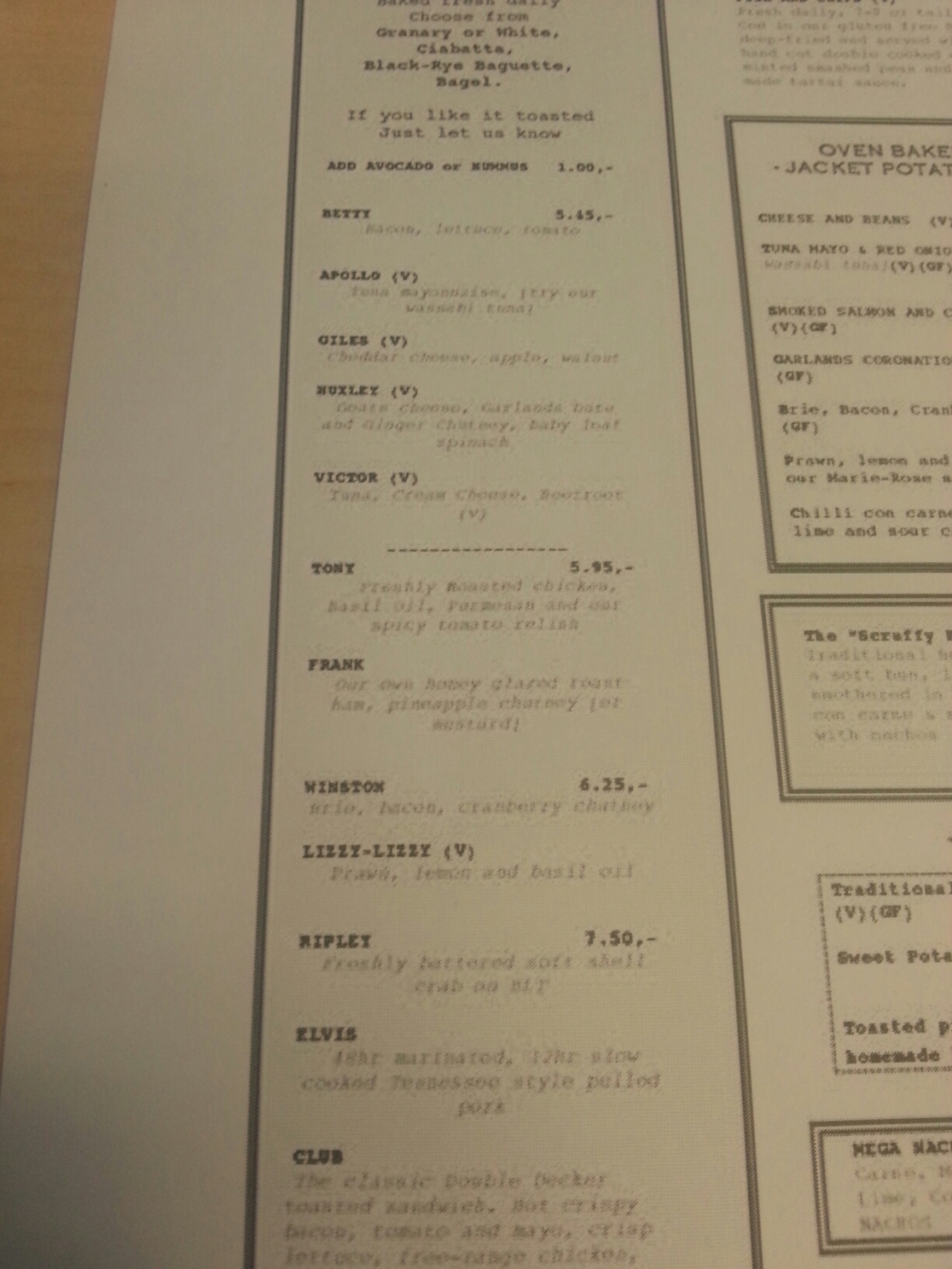 The tradional Welsh cawl (a brothy stew, usually containing lamb) on offer also looked very good and I very much liked the sound of the pulled pork pancake stack. 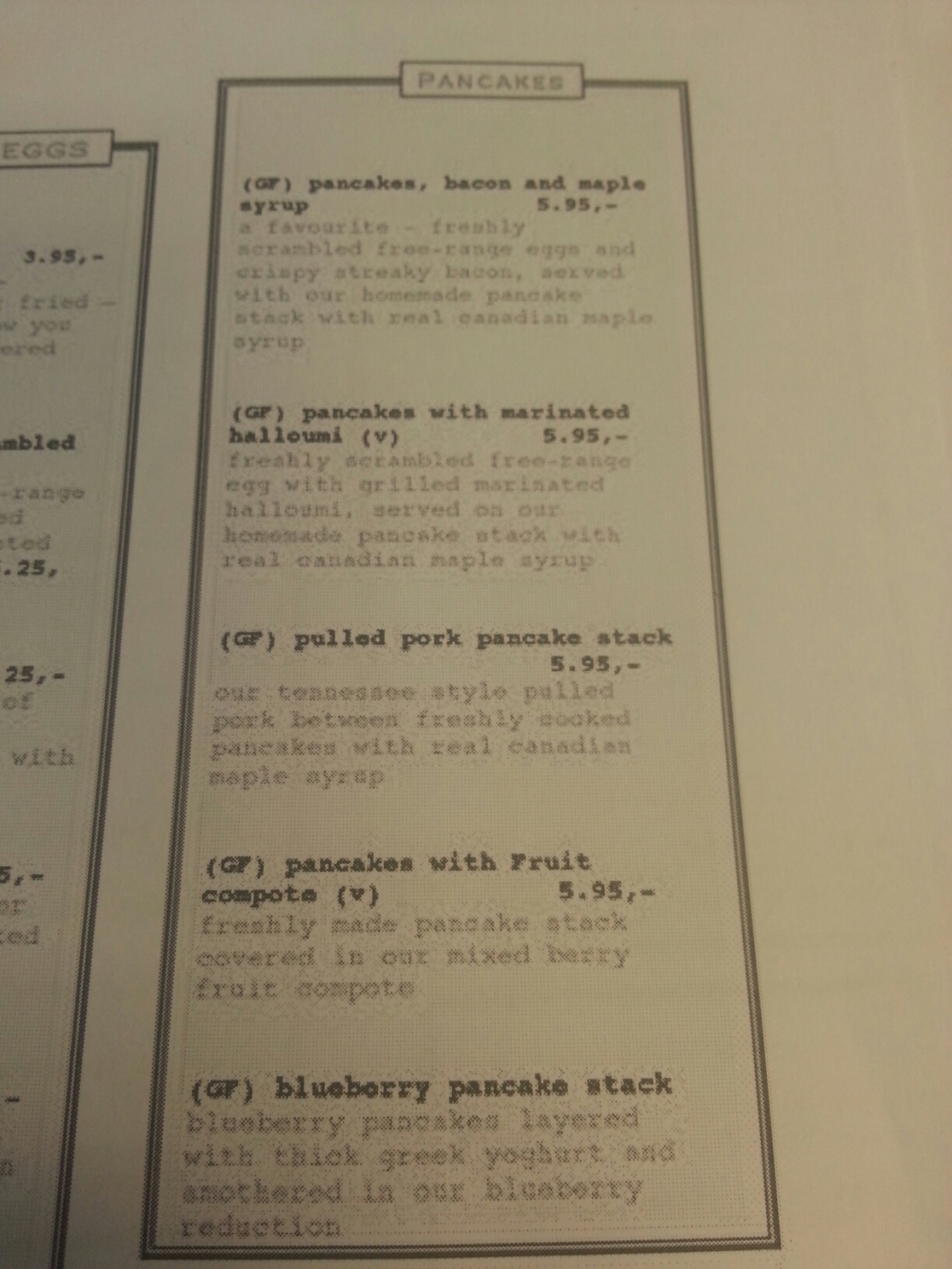 Plenty of options also for veggies on the menu.

Drinks wise, I went for the jug of cloudy apple juice ( £2.25). It was suppose (as the name suggests) to come in a jug, but apparently the jugs were all broken so it arrived straight in the glass. I have to say the juice was lovely – sweet, but not too so, with a nice acidity to it that made it very refreshing. I am not a massive apple juice drinker, but I really enjoyed this stuff. J orginally asked for a berry smoothie, but changed her mind on being told it would take a while. She settled on the apple juice and agreed with my view on it being lovely 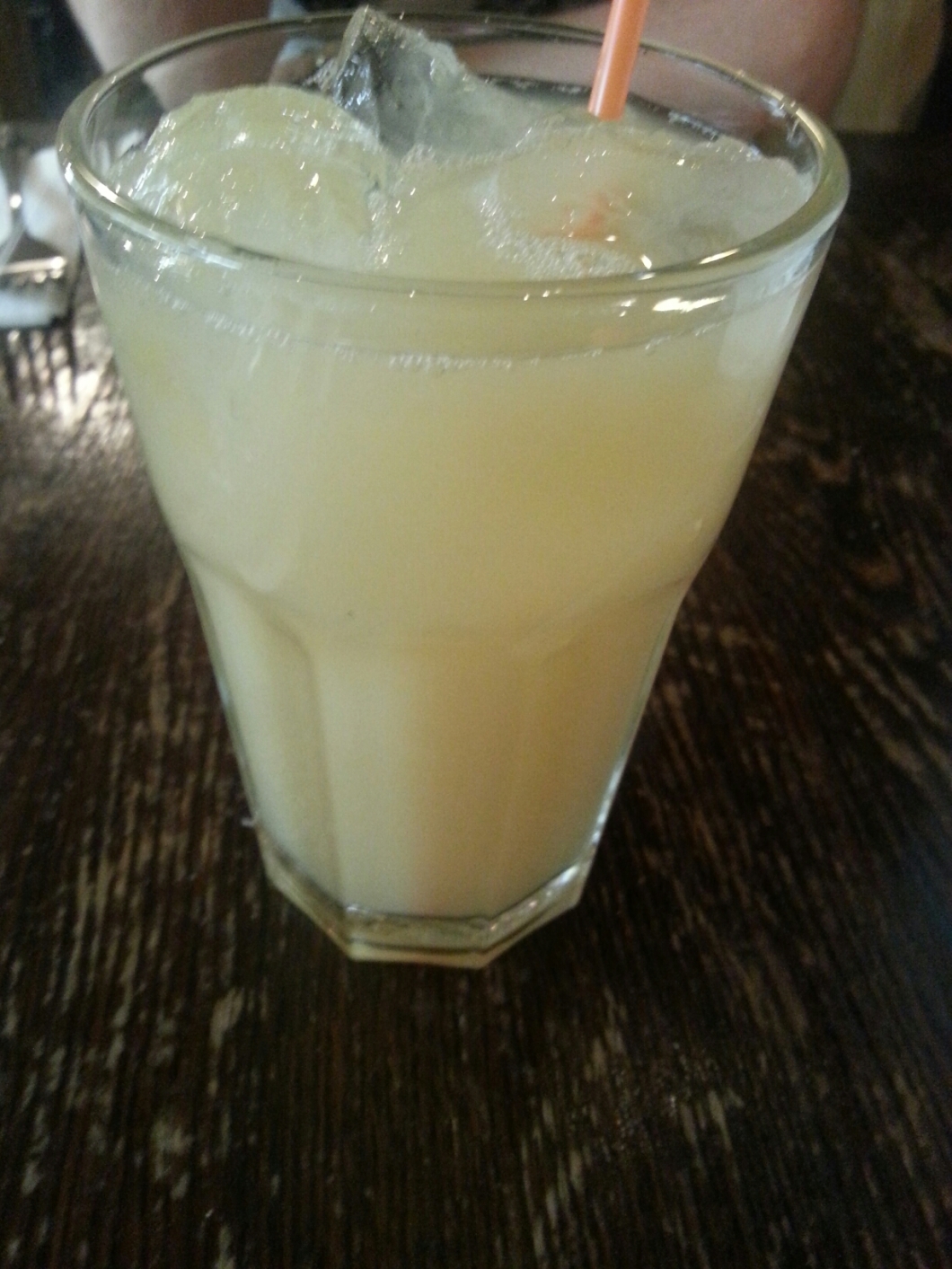 Other soft drinks on offer included various offerings from Fentimans and they apparently (according to Tripadviser reviews) do a very good coffee.

The damage for me was £10.20, which was I thought a bit steep for cheese on toast (albeit a very nice one – on the second attempt) and an apple juice.

I had high hopes for Garlands based on Tripadviser reviews and the recommendation given to J and I about the place.

My rarebit , once actually cooked, was very nice with a very good accompanying chutney. It was just a bit too highly priced, in my view, for what I got. Curiously other stuff on the menu seemed quite competitively priced (Cawl, with a hunk of mature cheddar – £7, pulled pork pancake stack – £5.95). Should two rounds of cheese on toast really be more expensive than a soft shell crab doorstep sarnie (£7.50) or a lamb stew (Cawl) with a hunk of cheese. Personally, I would say no it shouldn’t.

J’s dish, whilst nice, was a bit one dimensional especially on the texture front. It was crying out for the addition of something with a bit of a bite to it.

I do like the fact that they buy local and are proud of it. Perhaps more details as to what these local products are would be helpful. So instead of referring to local ale, why not actually name it ? Just a thought. 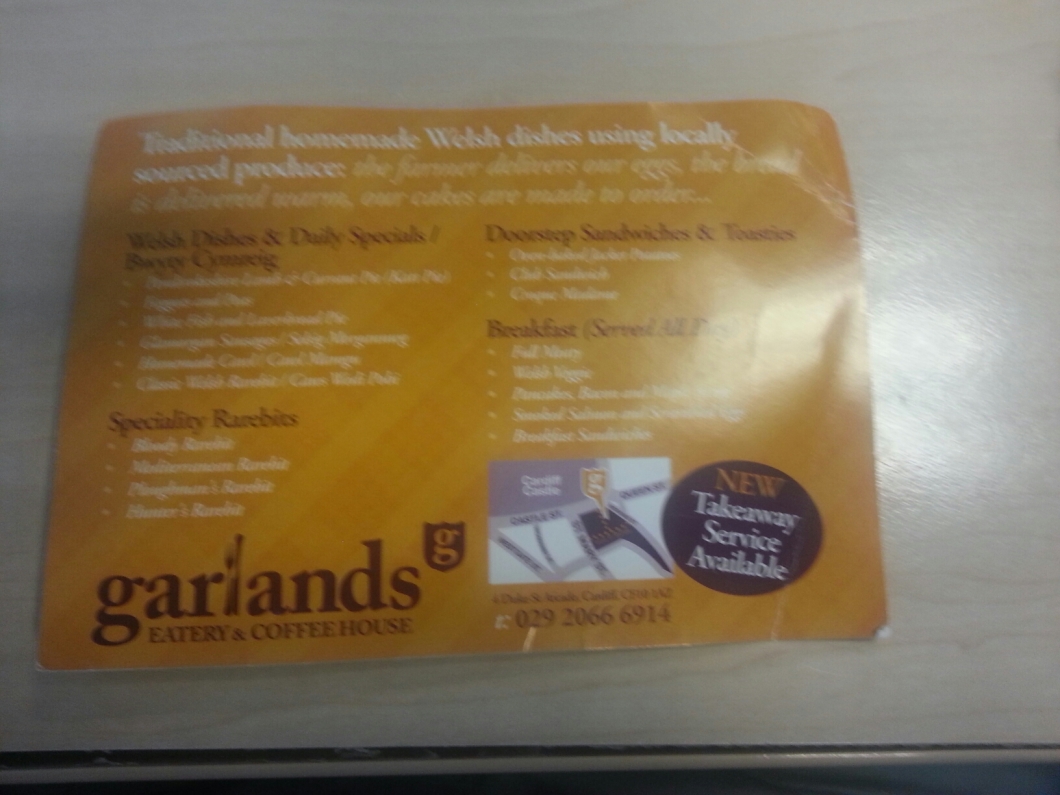 Would I go back ? Yes, it is a nice enough lunch spot and there is plenty of stuff of interest on the menu to warrant a return visit (Cawl or the pulled pork pancake stack would be top of my list). The rarebits are, in my opinion, a bit too pricey for what you get though.