Whilst in Somerset last weekend (doing son duties over Mothers Day weekend) visiting my Mum’s shop The Changing Room (shameless plug but my Mum made me do it !) in Wells to pick up house key, Mrs. SF and I did a bit of shopping. I hate shopping unless it involves food and/or drink, so food and drink it was and (boo) shoes (actually slippers – we are so rock and roll).

Wells is a rather lovely little place (as it has a whooping big Cathedral it is officially a city) and is where I went to school or, as most of my teachers would say, where I was a lazy little …. for 6 odd years.  It has some nice shops including a rather nice deli (I do love a nice deli) in the form of the Queen Street Deli.

Now this deli just happens to stock  some preserves by a little company called “The Artisan Kitchen Company”. They do jams and marmalades, as well as pickles. No pickles were in stock (damn), but I was in the mood for jam and picked up three interesting looking flavours to try. I do love a bit of jam on toast or a crumpet.

At this point I should declare an interest here as the lady, Sarah, behind the Artisan Kitchen Company is my second cousin. I haven’t, however, seen her for I have no idea how many year and very much doubt I would recognise her in the street, even if she came up and punched me in the face.

The jams from the Artisan Kitchen are homemade in small batches in a big copper pot. The base fruits used are wherever possible locally sourced and there are none of the gelling agents and chemicals found in mainstream jams. The list of ingredients on the jars is wonderful concise, numbering only 3 or sometimes 4 ingredients. As they say, you get what it says on the tin (jar here). The labeling also refers to there being 70g of fruit per 100g, with the jars net weight being 227g. That is a lot of fruit per jar compare to most other jams I have seen. 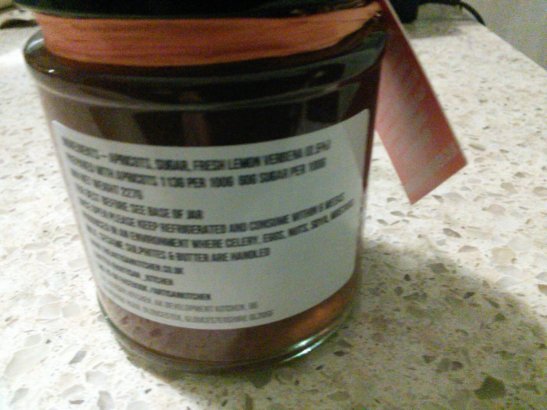 This company is based in Gloucestershire and has some really rather splendid sounding flavour combinations on sale. According to its website these include Seville cacao marmalade (yummy) and toffee apple jam (double yummy). I, however, went for the following jams. 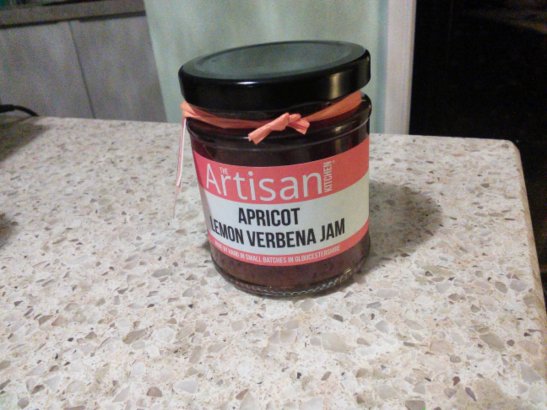 This was a slightly runny jam with more of a marmalade consistency. There were buckets loads of apricot in it with a lovely citrus note delivered by the lemon verbena.

This is a lovely breakfast jam. It would also be great as the jam filling in a victoria sponge cake and I am thinking as part of a great barbecue sauce (although a very indulgent one). 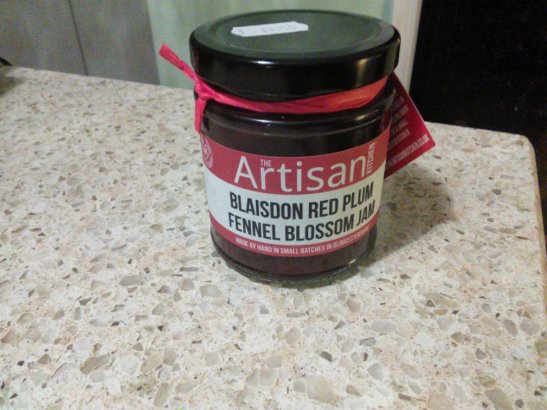 On opening there was a lovely aroma of plums, but I remainder intrigued by the fennel blossom ingredient which I assumed would give an anise hit to the jam. There was, however, no aniseed evident from the initial smell.

The jam is thick set and full of fruit and had a lovely slightly sour plum taste with the merest whisper of anise from the fennel pollen. I could of done with more aniseed, but I like aniseed (as kid use to love aniseed balls). 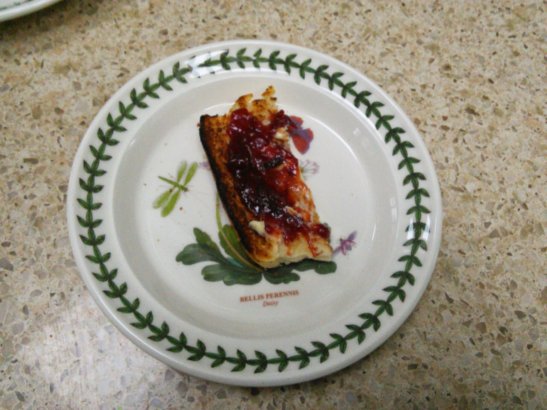 This was a really nice jam and I loved the slight sourness of the plums. The fennel pollen flavour was a bit to subtle for me. 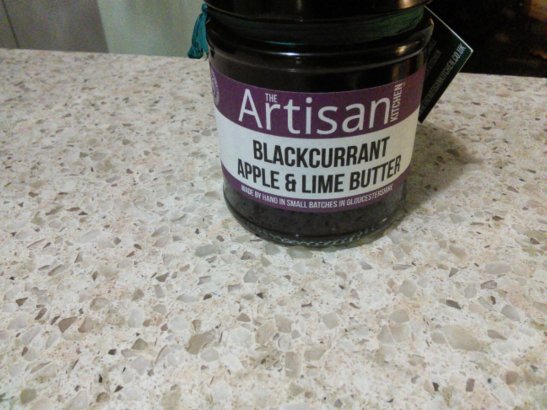 The jar says butter, but to me it looked and tasted like a jam (distinction obviously lost on me) and on the website it is down as a jam. This jam/butter was thick set like the Blaisdon Red Plum and was almost black in colour.

The taste was a lovely mix of sharp blackcurrant and tangy lime, tempered by the apple. I could of quite happily dispensed with the toast and simply eaten this from the jar with a spoon. I loved it.

I really enjoyed all of these jams and love that all that is used is the base fruits, lemon juice and sugar. As a result the flavours really shone through.

They company has won multiple awards and I can see why. They really are the best jams I have tasted.

The website has loads of interesting flavours on sale direct from the site, as well as details of stockists. Unfortunately for me none are in Cardiff 😟.

Price wise I paid £3.50 a jar (they are £3.99 on the website). Certainly not cheap, but there is real craftsmanship in the making of these jam and I think the price is fair for the quality.

Would I buy these again? Definitely – best jams I have had by a country mile. Delicatessens in Cardiff, please stock!

This entry was posted on Apr 2, 2014 by solicitingflavours in Food, Food and wine products, Jams, Outside Wales, Preserves, retail.