Korean cuisine is renowned for its barbecued meats and, with my current obsession with all thing barbecue, once l heard that a Korean restaurant had opened up in Canton, Cardiff I was always going to be beating a path to their door sooner rather than later.

So last Saturday  Mrs SF and I found ourselves in Kimchi salivating over the menu (well that was only me actually, Mrs SF being far to demure for that).

On arriving (having thankfully booked) at 7pm we were shown to our table which included the welcome bonus feature of an integrated ceramic griddle (want one, but Mrs SF said no ).

The place was already pretty full with the majority of the diners seemingly young Koreans (apparently there are a fair few Korean students in Cardiff and they miss their home food). This boded well for the evening ahead.

We had a warm welcome, with menus delivered promptly and  our drinks order taken. First off we were given two small bowls of nibbles, one of bean sprouts in a sesame oil dressing and another of a sweet pickled seaweed (I think). The later was particularly nice with the sweetness of the pickling juices working well with the seaweed. We were asked by our very helpful waiter,  if we were familiar with Korean food, in response to which I launched into a story about being horrendously jet lagged in Hong Kong and stumbling into the nearest restaurant to the hotel which happened to be Korean before finally saying no not really.

Anyhow, due to our limited knowledge of Korean food, we were helpfully shown around the menu and given recommendations as to what to order and the number of dishes that were about right for two people (more on that later).

The menu is split into various areas include BBQ (my focus for the evening), specials and stone bowls, hotpots/casseroles, rice dishes, sides etc.

On our waiter’s recommendation (me having asked about the BBQ dishes particularly), we went for four dishes, two BBQ and two specials and a bowl of the restaurants namesake and Korean obsession, kimchi. He did strongly recommend the stone bowl dishes (which did look very nice judging from my sneaky peeks at the table across from ours) and will try these next time but the focus of the night was always going to be BBQ.

First to arrive were seafood pancakes with a soy based dipping sauce. These were more akin to a frittata than what I would generally regarded as a pancake. They had a nice crispy exterior and a soft prawn filled interior. They were pleasant enough, although nothing to write home about.

These were swiftly followed by deep fried chilli chicken. This was an absolute delight. Beautifully crispy chunks of loveliness covered in a hot sweet and sour sauce spiked with thin slices of red and green chilli peppers.

I could have quite happily eaten a bucket load of these and Mrs SF quickly cottoned on to this and made sure they were out of reach (accessible by me only by leaning across a hot griddle ) to ensure she got her fair share.

As we were happily munching our way through the chicken, the meat arrived. We had, on our waiters recommendation, gone for a beef and chicken bulgogi (a very popular dish in Korea apparently). Both were marinated in soy, garlic, ginger and sesame, aswell as interestingly pear ( presumably for it tenderising qualities). The beef was described as tenderloin and the chicken was thigh rather than breast meat (much tastier in my opinion). Each was thinly sliced for rapid cooking.

The meat was then tossed on the griddle (which had an inbuilt temperature control which was very easy to use) and once done popped into the lettuce leaves ( these were a bit limp and a bit short in number but am sure if had asked more would have been forthcoming).

Both the chicken and the beef were full of flavour and beautifully tender (all down to the cook, well OK the marinade) and it was fun cooking at the table (with Mrs SF watching with mild bemusement and then increasing horror as I dropped various utensils on to the griddle and then broke the tongs provided to pick up and flip the meat on the griddle – I maintained they were on their last legs already).

A special mentioned should go to the kimchi (fermented spicy cabbage, which I know doesn’t sounds particularly appetising). This stuff is weirdly addictive ( we ordered two bowls in the end) and it was good both cold straight out of the bowl and heated up on the griddle. I started off thinking hmmm this is sort of OK and then realised I couldn’t stop eating it.

At this point any normal person would have called it quits (my phone packing up was perhaps a sign – damn you Samsung battery life), but I am made of more foolish stuff and decided on round two and ordered duck breast and, after a somewhat confusing conversation with a waitress, the Galbi marinated beef spare rib (there were two marinated beef rib dishes on the menu – Galbi and La Galbi La and from the conversation the former was I think what most of the Korean students go for). Mrs SF had wisely called it a day at this point.

The duck was a bit of a disappointment and easily the worst dish of the night. I like my duck skin crispy and the meat pink but the thinness of the slices or the incompetence of my cooking (bit of both I think) meant I could have one or other but not both . To me it was also lacking somewhat in flavour. The menu said it was smoked but I could not defect any sign of that.

The beef ribs where actually wafer thin curtains of meat and the perplexing mystery of why there was a pair on scissors at the table was solved. The rib meat was a bit fatty in parts and a wee bit chewy (not the cooks fault, honest) with an intense beefy flavour. I quite liked it, but suspected it would not be to some people’s taste.

By this point I was fit to burst and declined the offer of ice cream until was told it was free, which caused me to instantly change my mind. I feared this would be my Monty Python Mr Creosote “wafer thin mint” moment, but my sesame seed flavoured ice cream was tasty and very refreshing and took the edge off the meat sweats. Mrs SF also gave a thumbs up to her green tea ice cream, the only other flavour on offer (much to my surprise, as my only experience of green tea ice cream led me to conclude it was unsalted frozen butter dyed green).

On the drinks front the list is fairly short with bottled beers, rice wines, soft drinks and a truly woeful wine list (two whites, one red and a rose – all depressingly dire. A Riesling would have been good on the list bearing in mind the Asian flavours) . The sole red on the list is a Stowells Shiraz. Does anyone really drink Stowells wines, other than under extreme torture? As me and rice wine do not get on, I went for the Korean beer. I starting off with Hite which was wet and cold, but tasted of well, nothing. This was followed by the other Korean beer on offer, Cass, which amazingly tasted more of nothing than the Hite. I overheard the waiter tell the table behind us that Koreans don’t drink much and judging by their beers I can understand why. Mrs SF has a soft pear juice drink, which was rather nice being very refreshing and not overtly sweet. 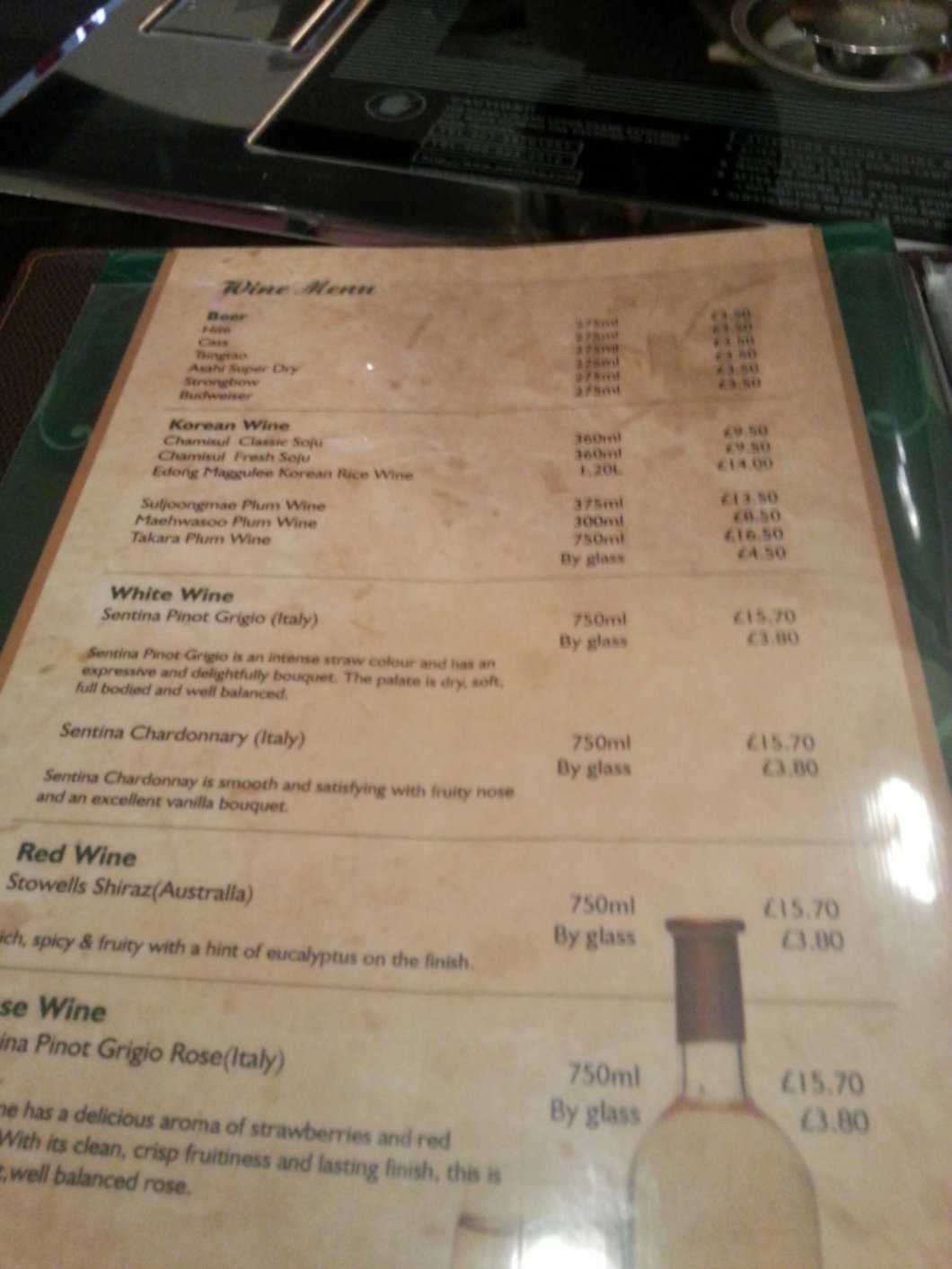 I really enjoyed the meal and experience at Kimchi. The food was lovely and the in table cooking was good fun and a bit different to the usual dining experience. I think it would be excellent with a group of four plus people (allowing further exploration of the menu) and they said that tables could be pushed together for larger groups and I also overheard there was also a private dining area.

Cost wise, with drinks, we paid £76 plus tip, but think one maybe two more dish would have been more than enough for four sensible people. On this basis are looking at around £25 a head including moderate amount of drinks. I think this is reasonable value.

Would I go back? Definitely. 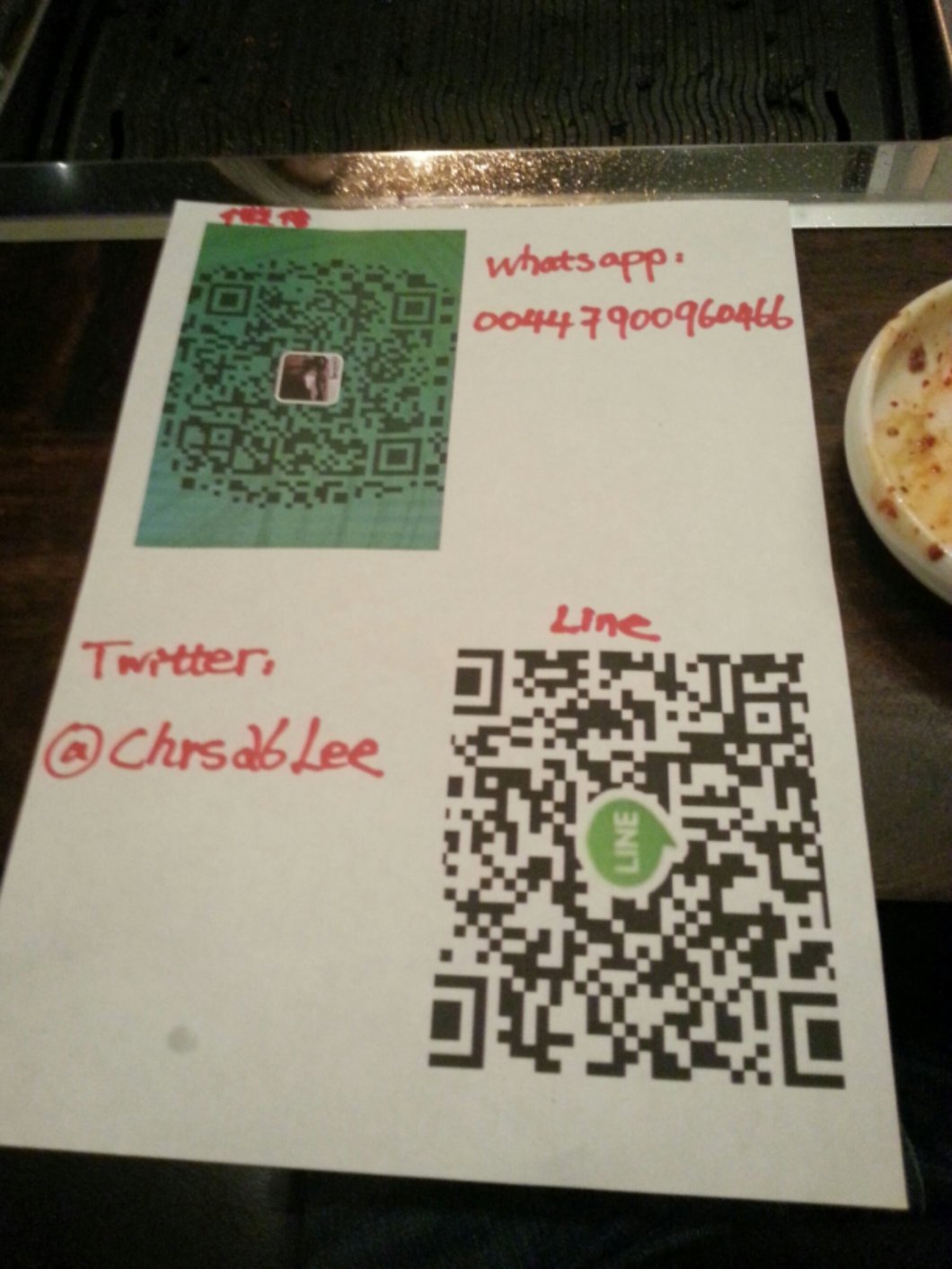