On my periodic trips on business to London I am often home late and passed the time when I feel like eating something substantial (as well as probably passed the sensible time to eat at night unless you are Spanish – in which case you eat ridiculously late).

As a result I usually grab something more substantial to eat than a sarnie on my way home or at lunchtime. My regular reader(s) will know that “that more substantial something” is more often than not a burger of some variety.

The blog has featured posts on burgers from Patty and Bun, Meat Market, Tommi’s Burger Joint, Honest Burger, Burgershack,  Mac and Wild and the Big Fernand in London and it is fair to say I do like a good burger (loath a poor one). Out of the many, many other burger joints in London, the one (along with Flip and Dip and the Lucky Chip) that people (whose opinion I rate on this sort of thing) seem to recommend time and time again is Bleecker Burger (named in homage to Bleecker Street in NYC – hence the post’s title).

Having a late meeting in London in the week, with the prospect of not getting home until much before 11pm, I decided to fuel up at lunch time and Bleecker Burger, a no frills burger joint in Victoria (with a few branch’s elsewhere, including a soon to be opened one in the City which will be more convenient for me), was my venue of choice.

The concept behind Bleecker Burger seems to be centred on simplicity in terms of both the food and the decor. Founded by an ex lawyer (very wise – the ex rather than the lawyer bit) who escaped the dog eat dog legal profession in New York (where the culture really is “you eat what you kill”) and set up a burger business from a food truck in London before upgrading to bricks and mortar. The Victoria branch I visited was pretty (well very) basic inside. I was not quite sitting on the lap of the person with the misfortune to have sat next to me but it was a close run thing.

It is fast food so no reason to linger I suppose. They call it (in the website blurb) a no bullshit setting! Sums it up quite well I thought. 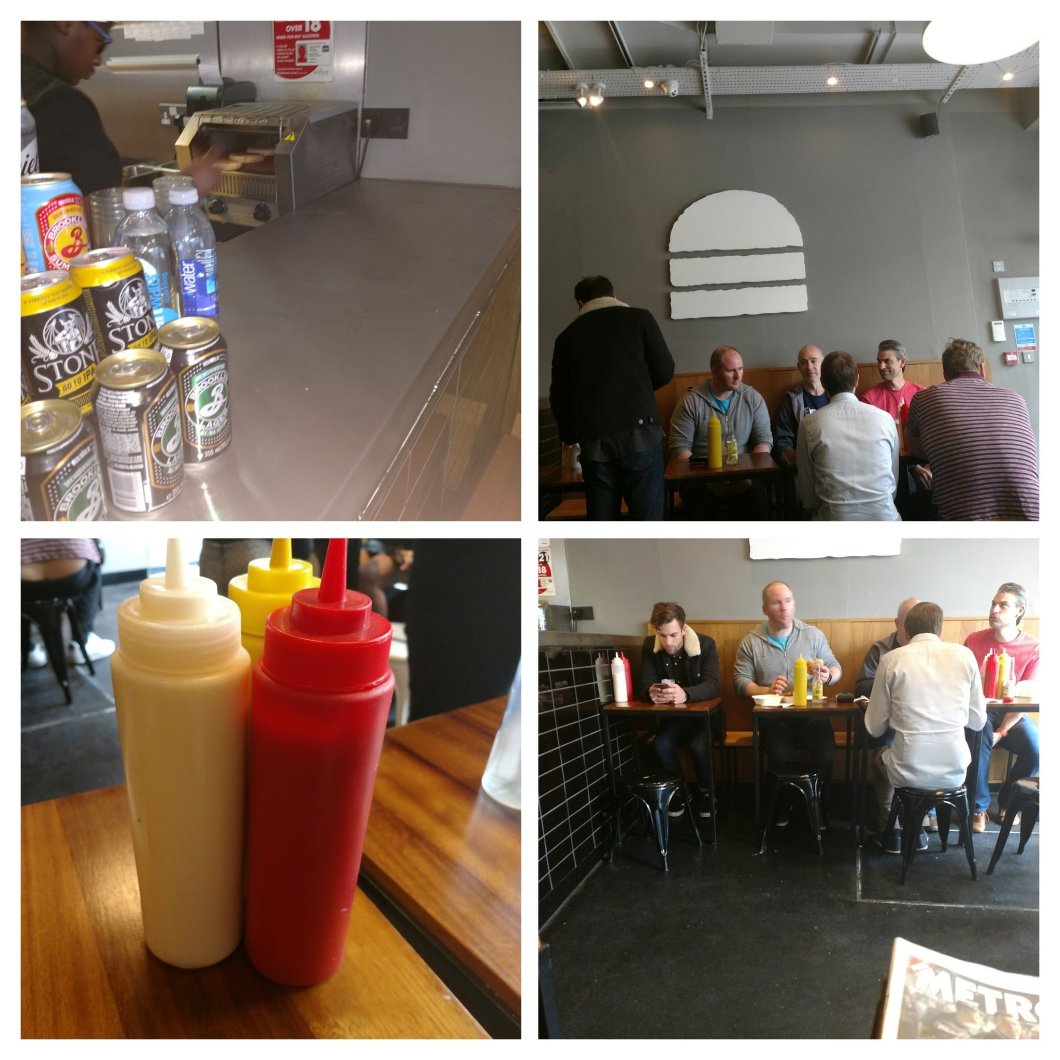 It has a mere 23 covers inside (size wise it seems half that) with a couple of tables outside. As a result seats are at a premium

The ethos of the place is (admirably in my book) that a beef burger should be all about the quality of the beef.

They, therefore, eschew the quite often over the top fillings and faux level of variety offered by some others burger joints (at Five Guys you can supposedly get 250,000 different types of burger – when you take into account all the topping on offer –  all of which, in my limited experience of the place, are likely to be crap). Here you have an offering of a mere 5 burgers on the menu (including a veggie one).

The most exotic of these is a blue cheese one (the “legendary” Bleecker Black – a double cheese burger with a slab of  black pudding jemmied in between the two beef patties – was seemingly off the menu on my visit), with the others back to basics cheese burgers (double or single) and the option to add bacon if you are feeling daring.

This is very much in line with my thoughts on a burger (less is often more in my eyes) and thus even before I tucked into my burger I had given the place a big tick in the box. Odd mind, with the simplicity theme, that there is no straight burger on offer (I suppose you could asked to hold the cheese but then you would still be paying for it).

I went for, that almost most basic of burgers, the classic cheeseburger. I doubled up (£9 – single patty one is £6) because I am a greedy sod!

Here it really is stripped back to the basics. A sesame topped lightly toasted bun (nice to see that there is life in the old stager yet),

sandwiching American cheese, slices of raw onion, “special” sauce and the all important beef patty. As a result there really is nowhere to hide with this burger, with the beef required to do all the talking.

Cooked a lovely medium rare it was all about the beef. 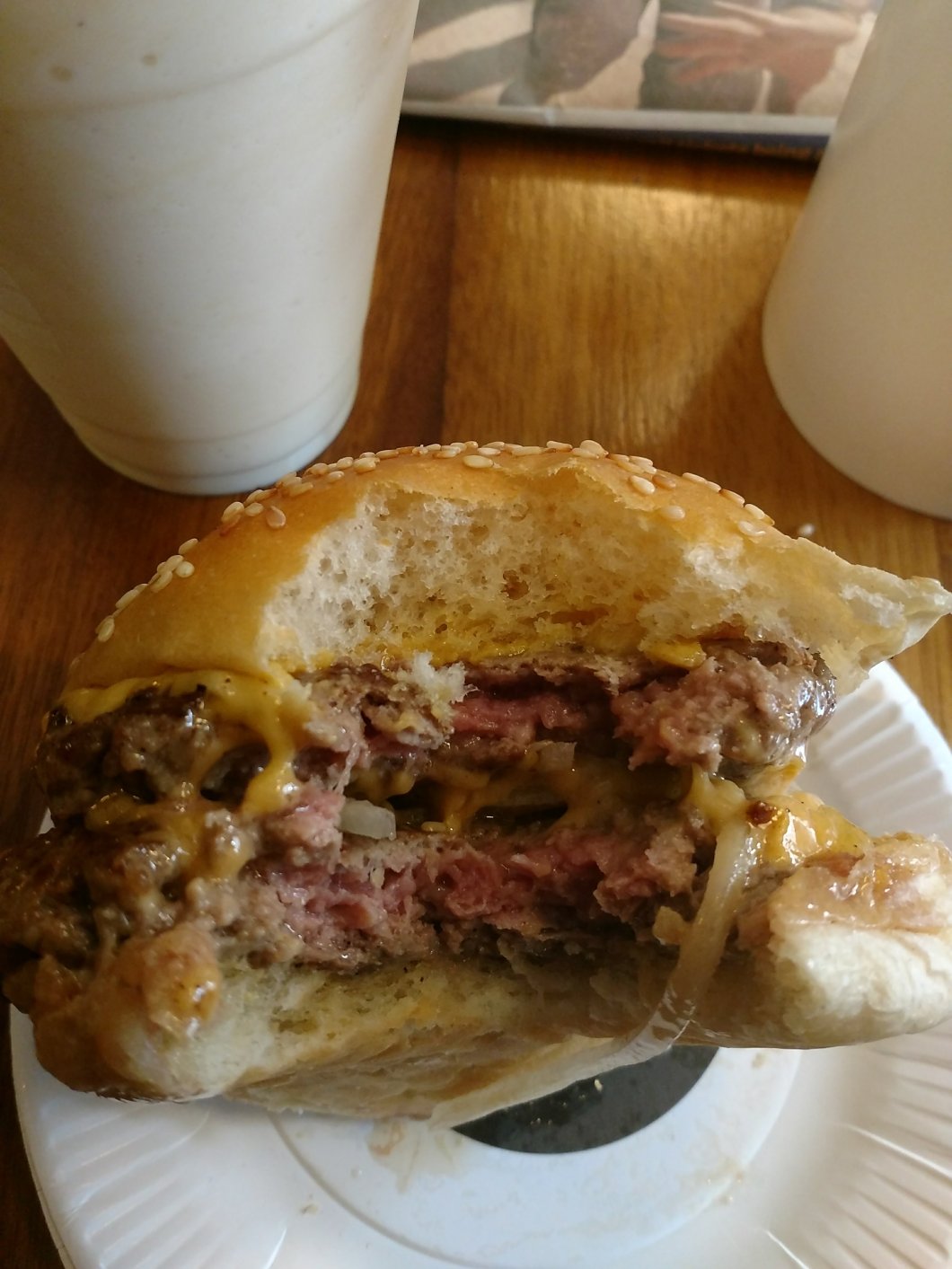 The soft, yielding, handmade, knobbly patties were seasoned just right and had that lovely umaminess that comes from proper dry aged beef (here 40 day dry aged from the Butchery in Bermondsey I believe). It had an almost butteriness to it that was really rather lovely.

The raw onion helped to cut the richness of both the cheese (just the right amount and spot on gooey) and the patties. Bar from the onion there were no veggies in sight  – no tomato (my tomato despising friend Fraser would approve – he wouldn’t however approve of the level of rareness here as he likes his meat cooked to a charcoal level of doneness i.e. How would you like it cooked? Ruined pleased!) or even lettuce. This minimalist approach is right up my street, burger wise, I have to say. The description referred to “special” sauce, which was a bit too minimalist in quantity even for me such that I couldn’t tell you what was “special” about it (maybe in the case of my burger it felt too special to be added).  No matter as it was all about the beef and the Bleecker double cheese burger certainly delivered on that front.

I ordered standard fries (£3) with my burger, which were plentiful  (bit too many for me – could easily share the portion between two) and skin on.  Nice and crisp (with some lovely uber crispy bits at the bottom – are these now banned in London 😀). 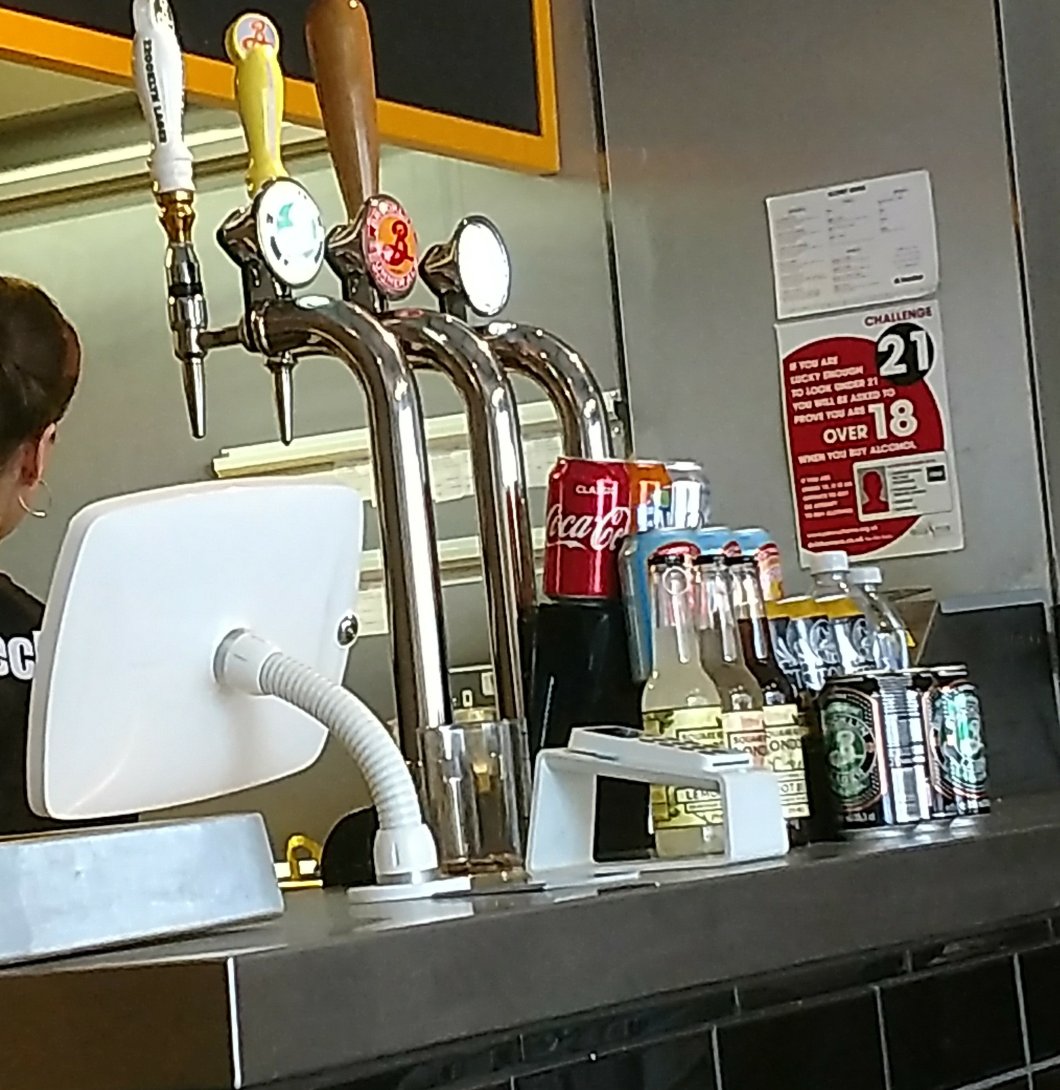 They have the usual suspects on the soft drinks front in terms of bog standard sodas (£1.50) and the much more interesting Square Root sodas (£2.50).
I, however, decided on a milkshake (£4.50) which came in vanilla, chocolate and vanilla, coffee and Oreo flavours. Being a boring old fart it was always going to be a vanilla one for me.

Thicker than Thickie McThickson, the thickest person in Thickerthanshiteshire, this was a mighty fine shake. Lovely hit of vanilla in there and really creamy. Tot of bourbon in the mix and it would have been perfect.

I felt totally stuffed after eating that lot and in need of a nap as I made my way to my work’s London office for a meeting! I didn’t feel the need to eat for the rest of what was a very long day.

The stripped back menu at Bleecker Burger allows for no hidding place in terms of what it offers, which lives or dies on the quality of the beef patty. On that front I have to say they nailed it. My two patties were cooked to a lovely medium rare (hallelujah) and had oddles of beefy flavour and a fab umami hit. It may have  be basic, but boy did it pack a flavour punch.

On the down side it isn’t cheap and the burgers aren’t massive. I doubled up and based on the size of mine am glad I did. It was a two hander, but only just. 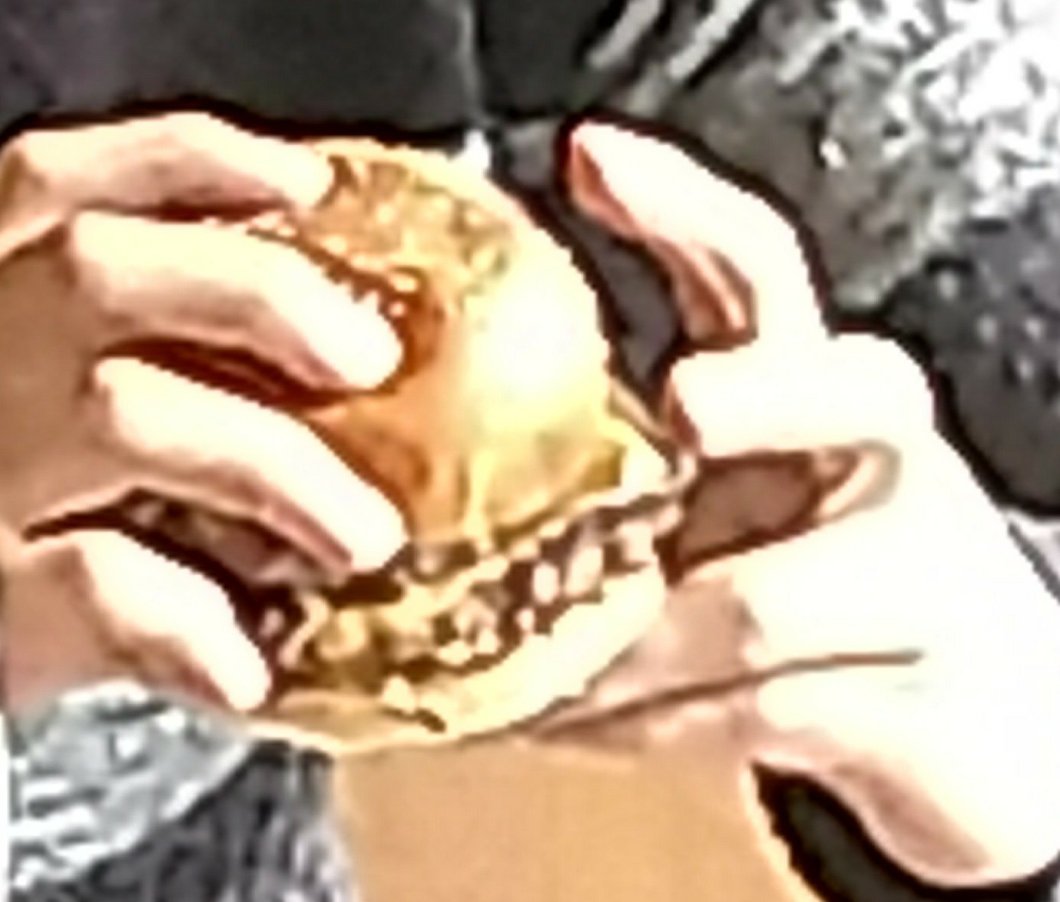 Many people will baulk (perhaps with some justification) at paying up to £9 for a burger sans fries or a drink and I did glup a bit at the £16.50 price tag 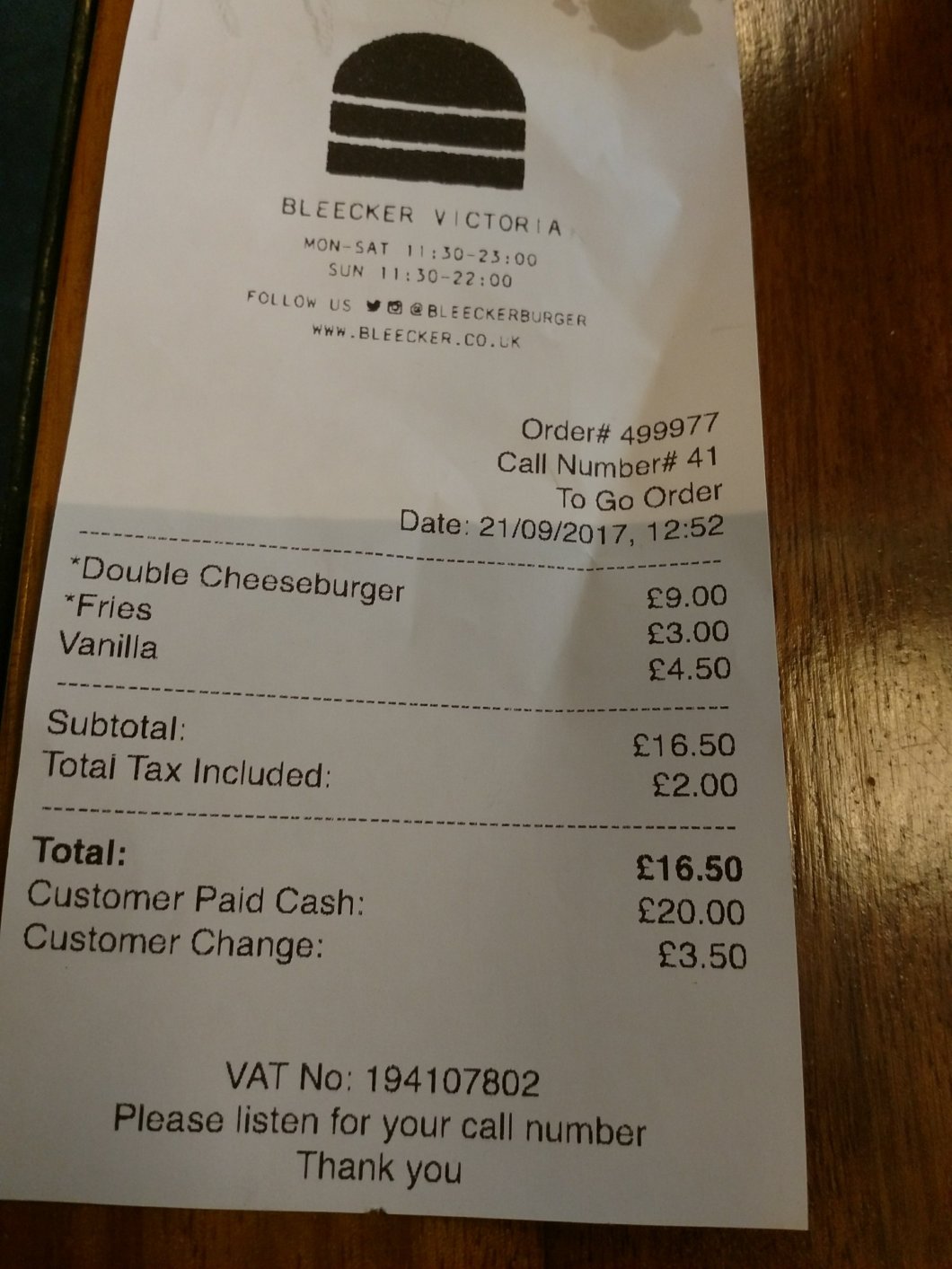 for my burger, fries and a shake in a place with only counter service and stripped back to the basics decor. In Cardiff you can get all of that (with table service) for under a tenner at the very nice Luvly Grub (rent in Tremorfa a tad cheaper than central London I would imagine).

I have slagged Shake Shack off many times on the value front and this place is on a par, if not a tad more, price wise (Shack Shack’s double cheese burger is £8.75 – with there being one just across the road from Bleecker Burger).

My view is you would be insane to go to Shake Shack’s over Bleecker. Bleecker’s burger is cooked to your preferences (i.e.  properly – medium rare – a must a this price point in my opinion), is bigger and above all tastes a darn sight better than the Shake Shack one. There is no getting around the fact that Bleecker is expensive, but I felt like I got what I paid for as opposed to feeling like I had been robbed blind (my abiding feeling after my one and only visit to Shack Shake).

I have to say I am really surprised that Grace Dent in a review of Bleecker referred to Bleecker as “Like a depressed Five Guys, if three had run off” (I couldn’t disagree more).  Five Guys is loathsome, if you ask me (wish all five would run off in Cardiff), and to me this is the equivalent of saying “an Ariel Atom is like a Robin Reliant without the roof or doors”!! There is, to my mind,  no comparison.

Would I go back? Oh yes – a “simply” brilliant burger and a great shake (would probably skip the fries next time though – unless sharing – as were too much with the shake and double patty).  The price point means it ain’t going to be a regular lunch haunch (not in London that often so never was going to be), but definitely a burger that slots in very much at the top end (quite possibly at the very top) of my London burger list.

Best burger of the year so far!

Also locations  in Spitalfields, Southbank and the City (latter open from Oct 2017).