Bit of artistic licence here, as the “monster(ously)” in the title alludes to the surprisingly affable monster, Sulley, from Monsters Inc (being dyspraxic and dyslexic, I often miss out letters in words or indeed whole words in sentences as readers will no doubt have noted – so Sulley naturally has became Sully to my mind).

Looking at online feedbank (albeit from the somewhat unreliable source that is Tripadviser where you often need to weed out “the axe to grind” and “you clearly own it or work there” merchants) it appears to be a place offering good honest grub at very fair prices. Sounded very much, on that basis, like somewhere that would appeal to the tight wad in me.

To test out the veracity of the online claims, a couple of the chaps from work and I decided to give it a go.

As I have said in the past on the blog, cheap rubbish is still rubbish  (albeit expensive rubbish doesn’t even have the excuse of being cheap). Cheap and good is, however, always a bonus.

Price and satisfaction do regrettably correlate, unless money really is no object (in reality it is always a factor to some extent unless you are filthy rich).

A meal that you rave about which costs you £5 is perhaps unlikely to find as much favour if it means dropping £50. If I told someone I had found a place that did great hotdogs their initial reaction may well be “Nice one, where?”. If it transpired that they charged  £50 a dog their reaction would, I suspect, be very different (i.e. You’re an idiot!).

Not always true, but a fair rule of thumb I would say. Value is what I tend to assess food places on and that is a combination of quality (including service and the surroundings, in addition to the actual food – although the latter should always be the key issue) and regrettably price (money being very far from no object to me). Value can be had at both the top and bottom end of the scales in terms of prices. Michelin star places tend to charge a lot (nice to see Restaurant James Sommerin bagging its first star last week) but argue you get what you pay for (sometimes but not always true in my albeit limited experience of Michelin starred gaffs).

It is perhaps interesting to note (on Michelin stars and price) that two Hawker stalls in Singapore (my favourite street food destination) have a star (so coveted by high-end restaurants) and one, Hong Kong Soya Sauce Chicken Rice and Noodles, sells it starred offering for the princely sum of £1.10 a pop. Now that is truly a double whammy on price and quality!!!!

I think it is fair to say Sully’s tick the box price wise. Whilst  Michelin stars most certainly are not in the offing, the question remains “Was the quality there, in the context of the price charged?”.

Inside it is your typical cafe. Nothing fancy schmancy, but all clean and tidy with plenty of space. 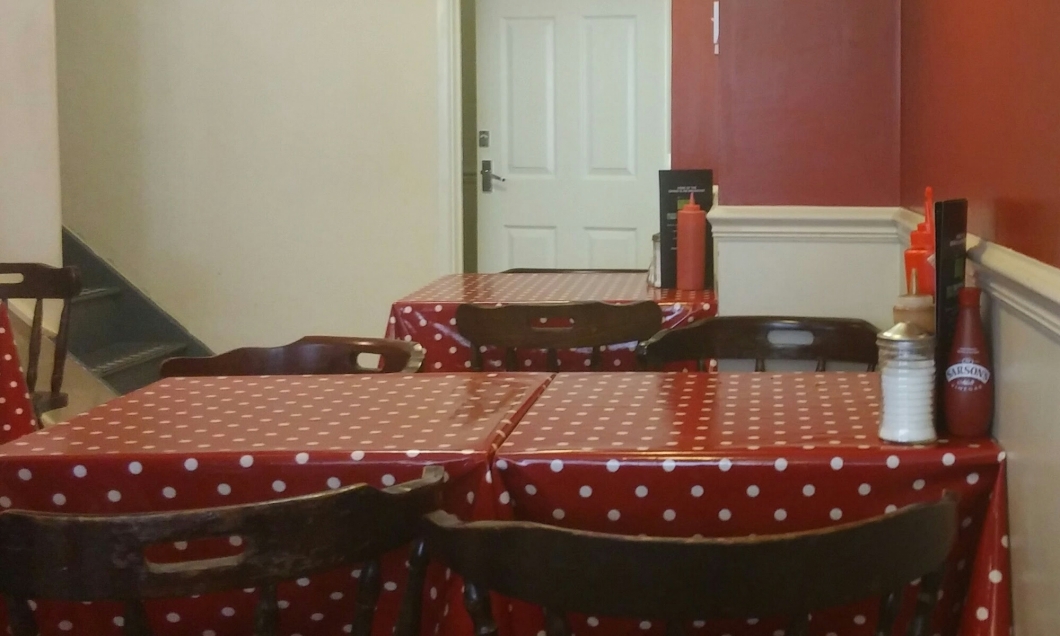 No design awards it is fair to say are going to be given to this place, but it is perfectly acceptable as a place for some breakfast or lunchtime scran.

The big menu covers what I regard as the “greasy spoon” classics, as well as a few left field offerings. All day breakfasts seem to be a speciality, particularly their “Grand Slam” breakfast, with the left field offering being a surprising number of omelettes, including Spanish omelette/tortilla, dishes.  On top of this there are lots of lunchtime cafe staples, like pie and chips, ham egg and chips and stuff of that ilk. 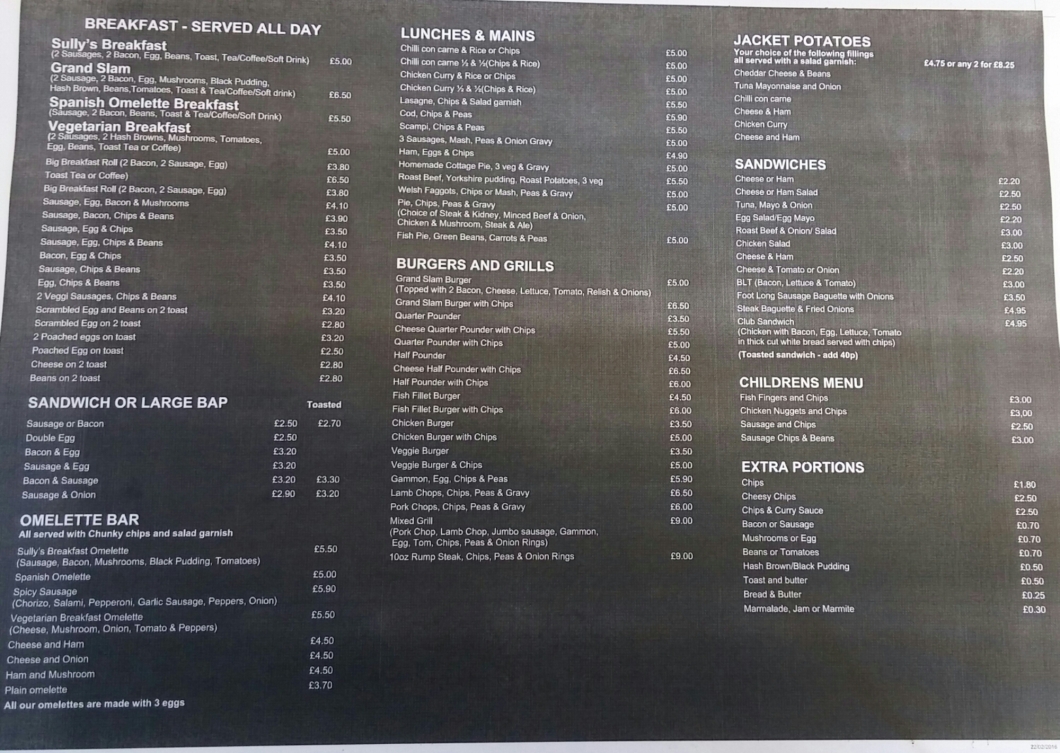 I ordered the Sully’s all day breakfast (as did the rest of the chaps) at £5 all in including a hot or cold drink. I had wanted the cottage pie and veg. or (failing that) the faggots, but was told neither were on. I therefore defaulted to what this place seems to do best – fry ups

Living up to the promise, Sully’s do indeed offer up a very acceptable fry up.

A perfectly cooked fried egg, which oozed molten yellow on being pierced, was bolstered by two sausages (fairly regulation, but OK) and two rashers of crispy (but not overly so) back bacon. Added to this was a decent portion of beans and a round of toast.

Predominately cooked to order (I suspect the sausages had an element of pre cooking, but could be wrong) and piping hot it was pretty much all I could have asked for from an all day breakfast plate at the price in question.

I enjoyed it, as the clean plate testified.

My only disappointment was self-inflicted in that I regretted not being man enough to order the “Grand Slam” breakfast (£6.50 inc. a drink). 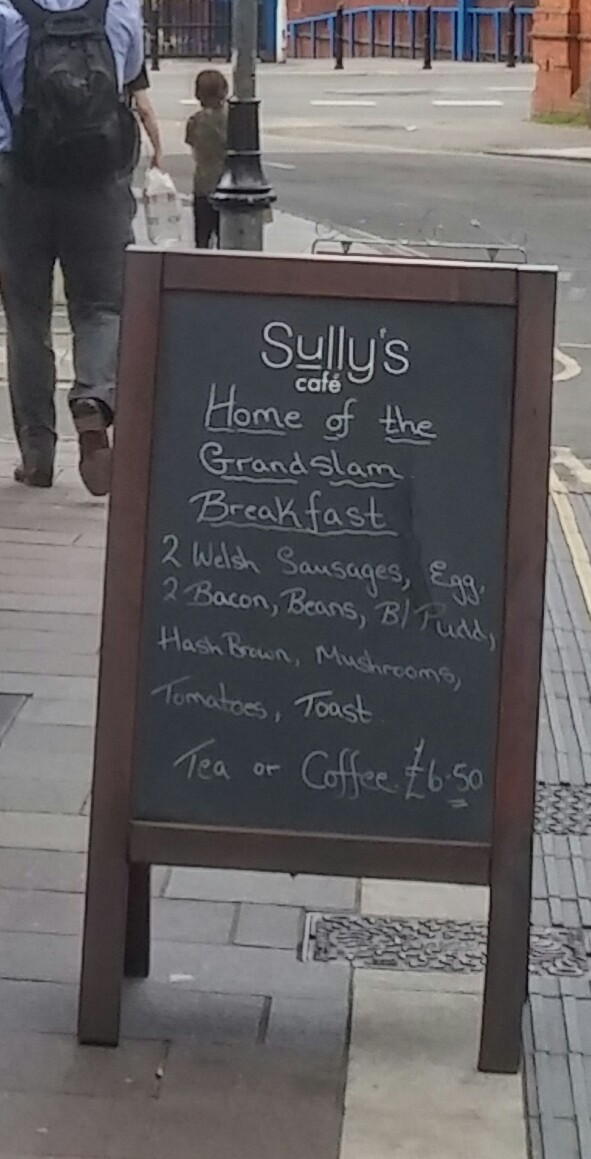 This added (over and above the standard Sully’s breakfast plate) to the mix black pudding, mushrooms, tomatoes and hash browns. I was, however, eating out that night and thought it best to keep my powder dry so to speak.

The drinks (all soft or hot – no booze) on offer are the usual suspects, with prices very fair. A cup of tea at £1.15 and a quid for a coke seemed very reasonable to me.

As we all had the Sully’s all day breakfast a hot (or cold) drink was included in the price. I had a very acceptable “proper” latte and the others a decent, both size and strength wise, builder’s tea. 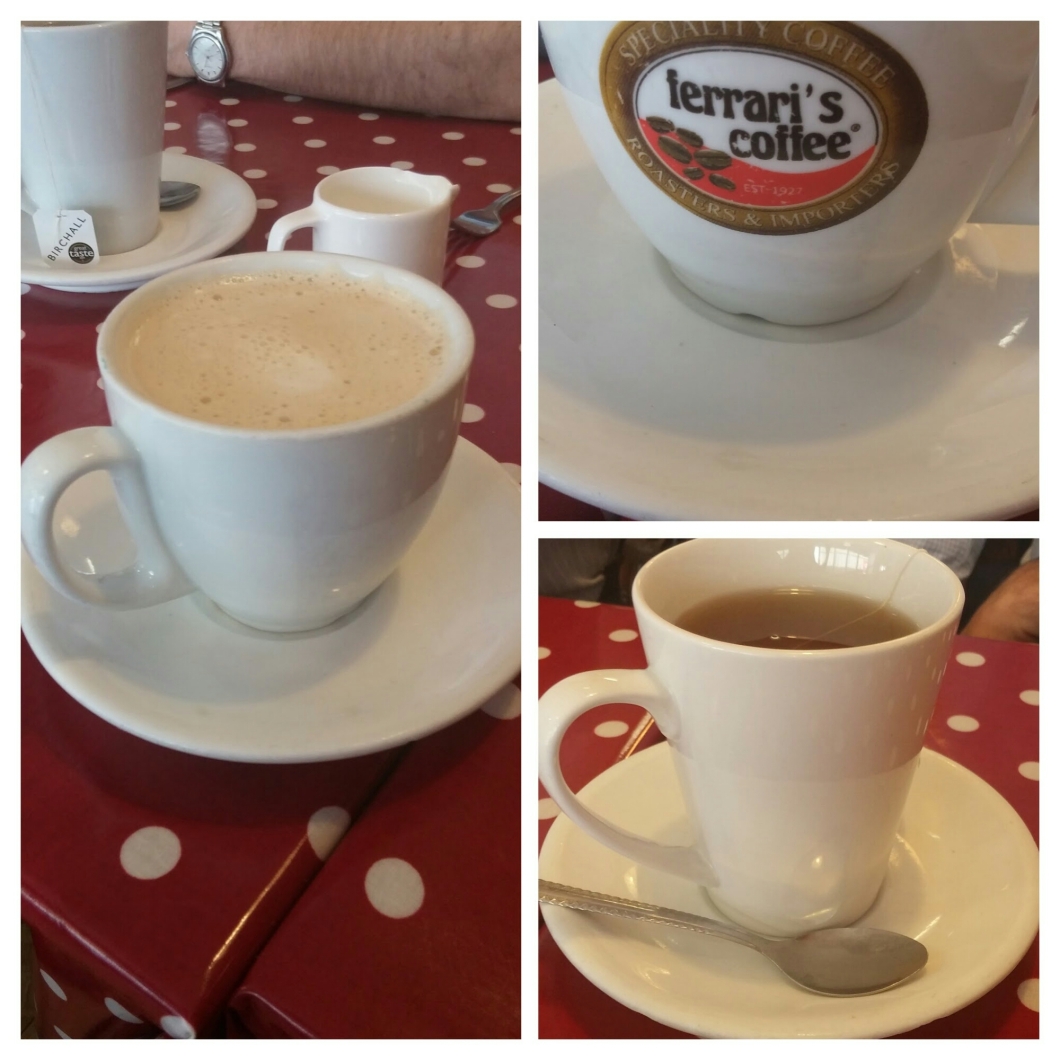 Bearing in mind it was included in the £5 price tag for our breakfast, I  thought this very generous.

I rather liked Sully’s. Good honest grub at a fair price always floats my boat and that is exactly what I got at Sully’s.

Great for a pre booze up/rugby game lunch (perhaps before a Blue’s game against Bristol RFC – my team –  in the European Challenge Cup) or as a pick me up the morning after a night on the tiles. Also great for a mid-week lunch if you are fed up with overpriced and underfilled sarnies from the supermarkets. There is always something quite satisfying about an all day breakfast.

In terms of the competition,  I would put it ahead of Truffles but not quite as good as the Trade Street cafe. It does have the drop on the latter though on location and price.

Would I go back? Oh yes, intend to take on the “Grand Slam” (which based on last season’s Six Nations table could be called the “Full English“- probably best not to in a cafe in such close proximity to the home of Welsh rugby and also after the All Blacks’ recent demolition of everyone in the Rugby Championship including Australia,  I – as an English rugby fan – feel an awful lot less smug than I did back in the Summer) at some point in the not too distant future.

With the talk last week (on the Welsh foodie front) all about 7 Welsh stars (Michelin) there is still a lot to be said for the greasy spoons at the other end of the spectrum.