There seems to have been a rash of independent coffee shops opening in Cardiff including the likes of the Little Man Coffee Co. and the Boardroom.

I love these independent where you can get a cup of coffee that actually tastes of something and has a bit of character unlike the dull as ditchwater stuff usually on offer at the corporate behemoths, such as Starbucks et al. Always amazes me how popular those sort of places are with the dross they usually serve up.

One proper independent coffee shop, which is getting some pretty good reviews for its coffee and overall vibe, is “Uncommon Ground Coffee Roastery” in Cardiff’s rather lovely Royal Arcade. 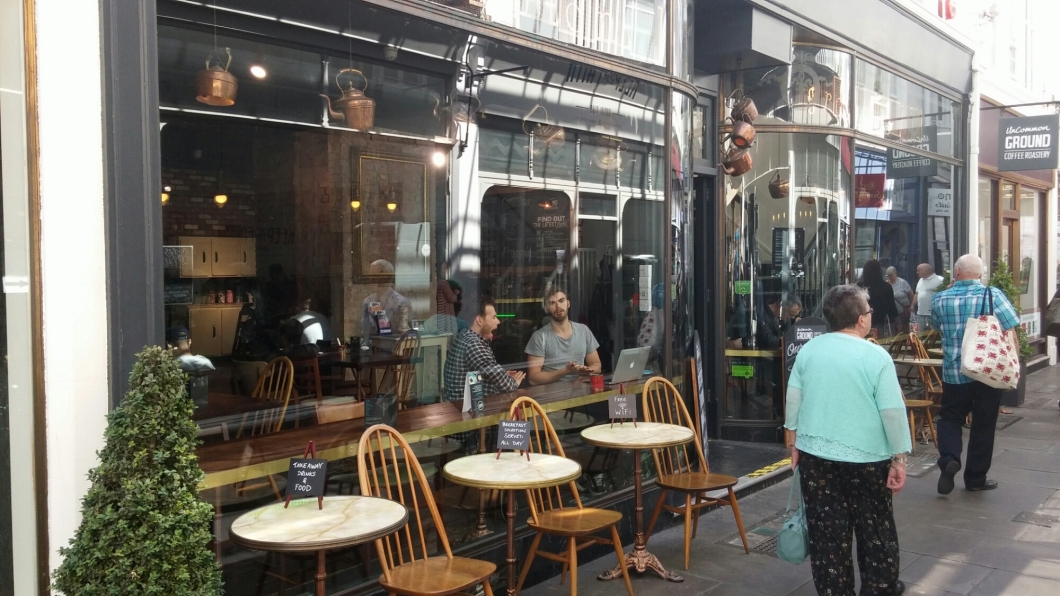 It is a big old unit, with quite widely interspersed seating (I like that), bare brick walls and bare boards on the floor. Quite austere, but in a good way, with decoration strictly functional or factual.

It is nice to see plenty of plug sockets in the place so you can sip your coffee and surf the net without fear of running dry on juice.

Not sure if they have WiFi (I have an unlimited data plan so not something I tend to worry about)? I assume so, as it is generally expected in coffee places these days.

As I mentioned early, this is a great place to watch the world go by with the constant flow of people through Royal Arcade.

I was fascinated by a dapper old gent and his blue rinsed wife (I assume she was his wife) who were in the Keep the Faith Social Club “, a tattoo, piercing and barber shop opposite Uncommon Ground. This place seemed to me to be a bit of a hipster haunt and they were not a couple I would have expected to see in a hipster tattoo and piercing joint.

Was he, I wondered, going to have a likeness of his blue rinsed Missus emblazoned on his back or one of those ear tunnels inserted into his earlobes (what does happens to your ear when you decide you don’t fancy wearing them anymore?). Just a hair cut I think in reality, but who knows 🙂 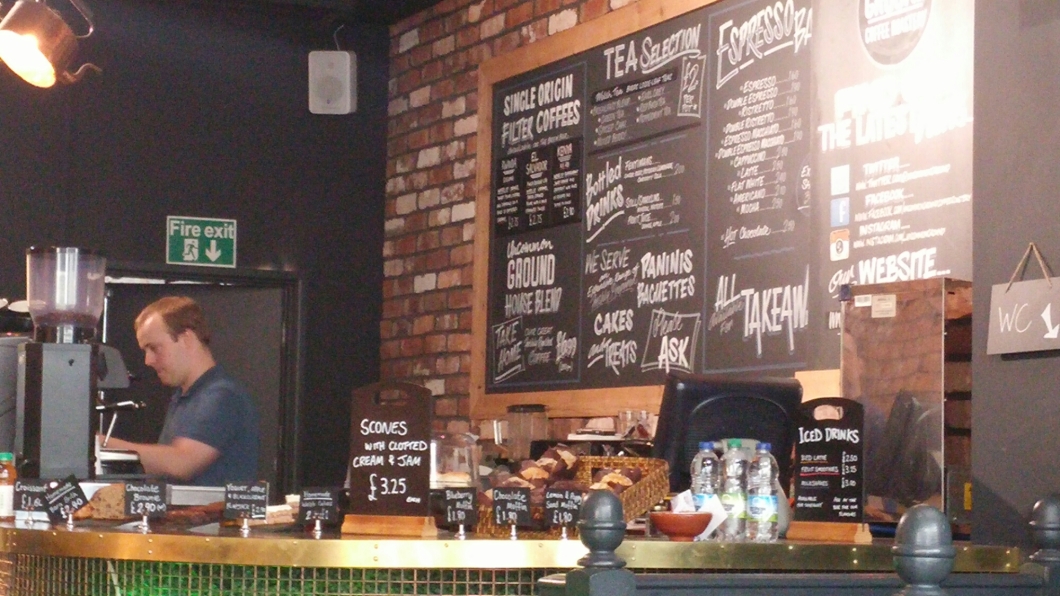 Being a coffee joint, the drink rather than the food is the focus. 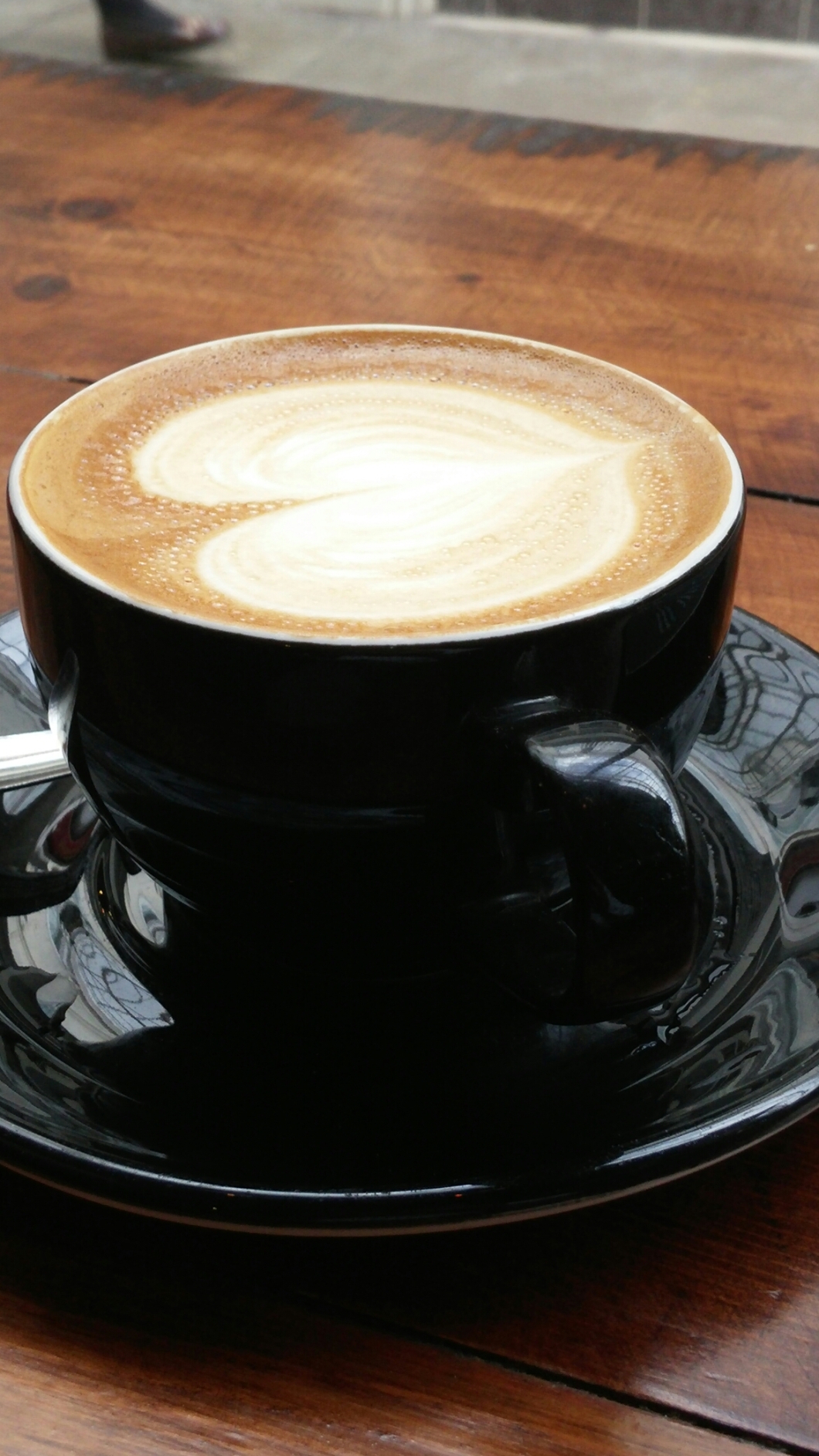 which was made from their house blend, the origin of which is helpfully diagramatically set out on a wall in the place.

Roasted in house, this Brazilian, Indonesian and Kenyan blend had a deep rich flavour and a back note of sweetness that was reminiscent (to my mind) of black treacle. These flavours lingered in the mouth, making for a very satifying cup of coffee

This treacle favour, I understand, denotes a longer roast at a relatively high temperature, with that sort of roast being ideal for milk based coffee drinks such as a flat white. A lesser (temperature and timing) roast on the other hand is more suited to coffee drunk black – more fruitiness being the result.

I really enjoyed my flat white coffee and was tempted to try one of their specials on the board, as a black coffee, to see if I could ascertain the nuances in flavour, but time was ticking away. Next time.

Food wise, they have a mix of all day breakfast/brunch items 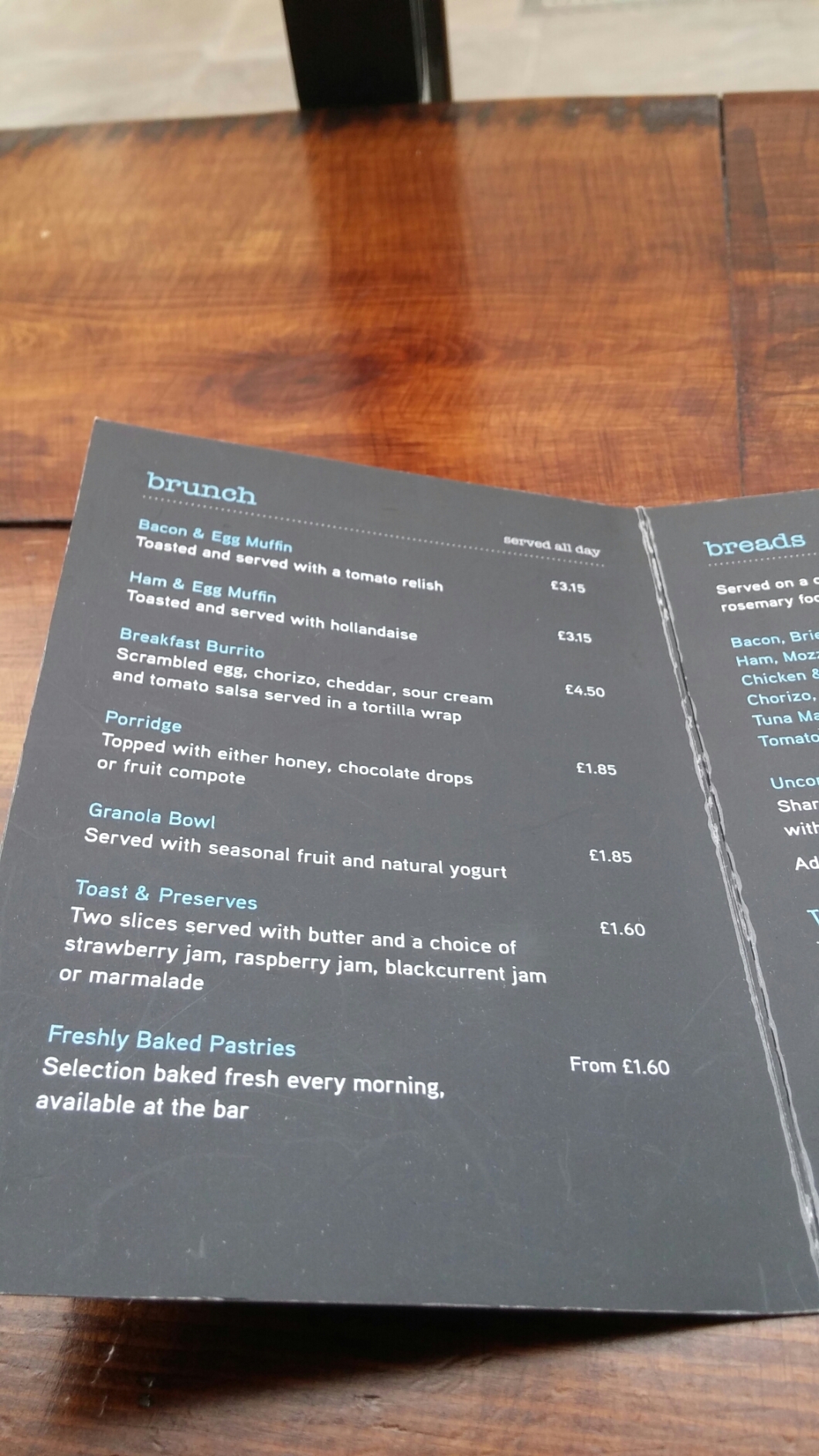 sarnies (including toasties and wraps). 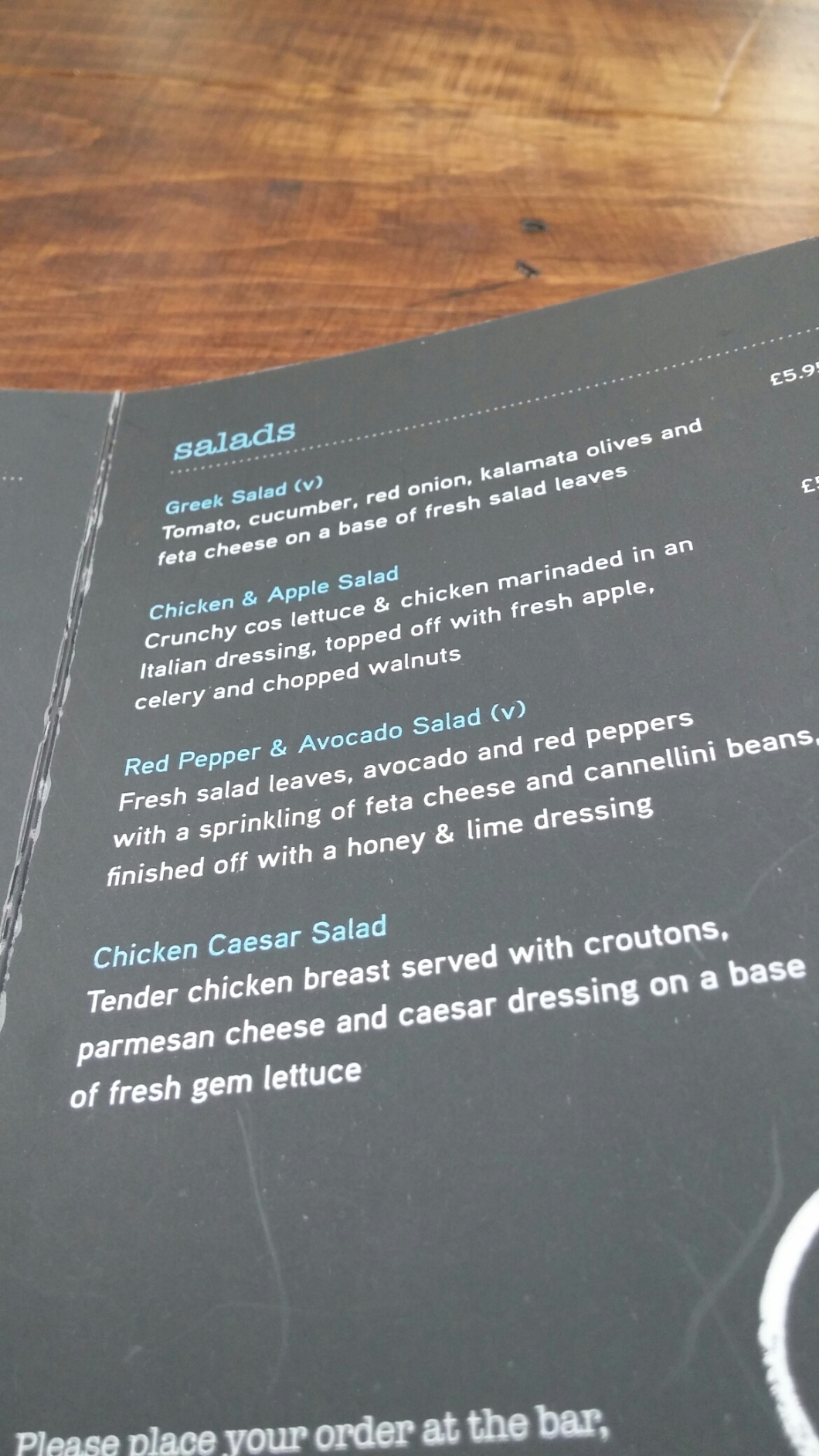 plus cakes of which there was a nice selection on the counter.

I went for a chicken caesar salad which was a bit of a mixed bag (excuse the salad related pun).

The good bits were:

– lovely, fresh as a daisy, crisp, whole gem lettuce leaves
– a nice, punchy caesar dressing that was not overly applied (doubt homemade though); and
– nice croutons.

The bad bits, mainly related to size for the £5.95 price tag, were:

– served in small bowl portion;
– not enough parmesan or croutons;
– nor much chicken and what there was looked a bit insipid and had that slightly disconcerting “out of a packet” shape and texture (the salad would probably have been better off without it)

Whilst it was actually quite nice (bar from the chicken which was meh), there simply wasn’t enough (to my mind) of it to justify the price tag.

The sarnies, whilst not exactly cheap, look better value to me than the salads.

I rather liked Uncommon Ground. Great coffee and a nice spot for reading the paper/a (e)book or to watch the world go by.

Food isn’t the focus and it shows, but portions could be a tad more generous or the prices dropped a bit in my view.

In summary expect a great coffee, but not perhaps a hearty meal. They don’t, it has to be said, pretend otherwise.

Would I go back? Yes – nice place with good coffee. Perhaps I will have a cake or a toasted sarnie next time.

They sell bags of their house blend coffee (£6.99), if you fancy it at home. Would make for a great morning flat white. 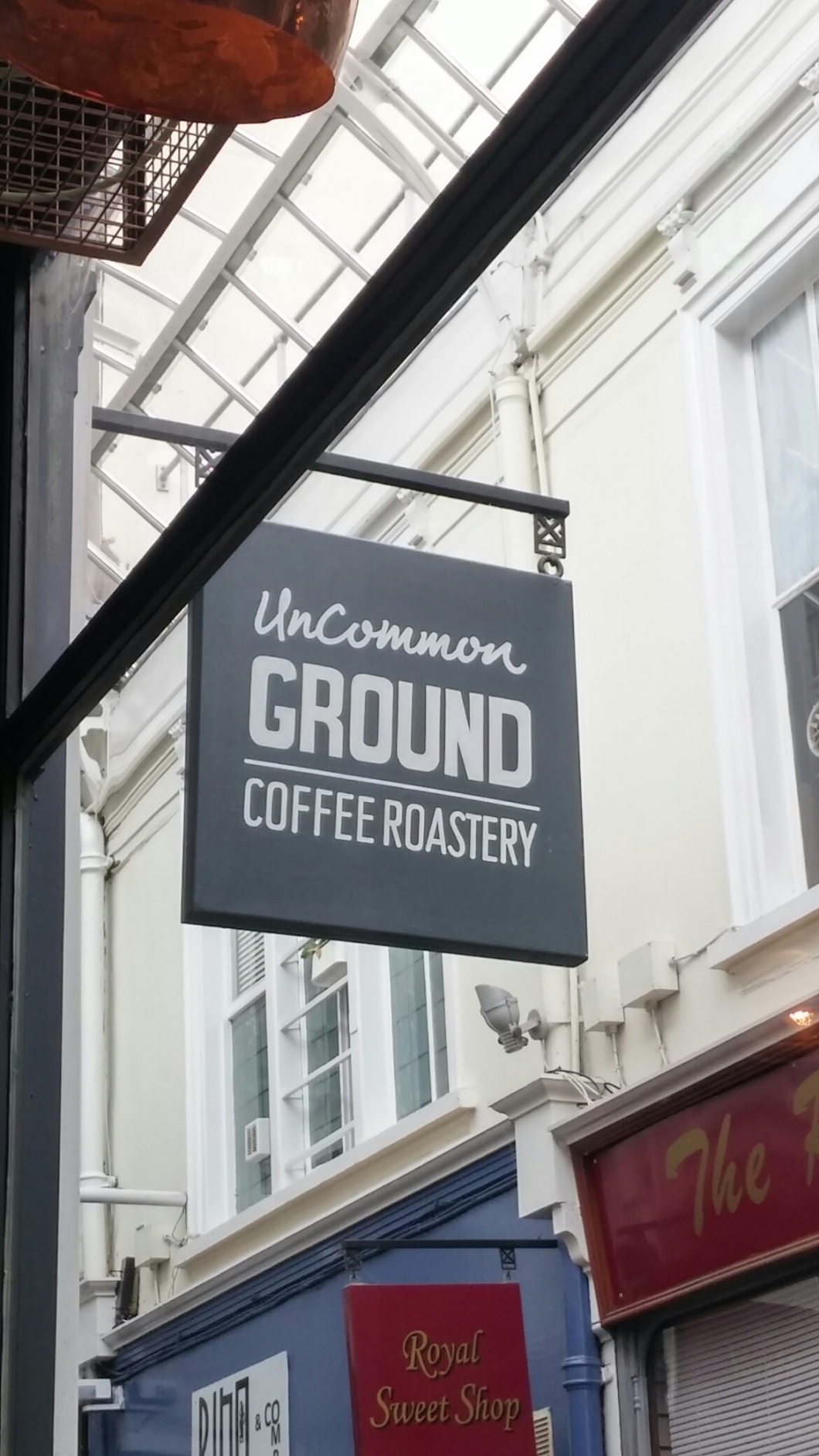