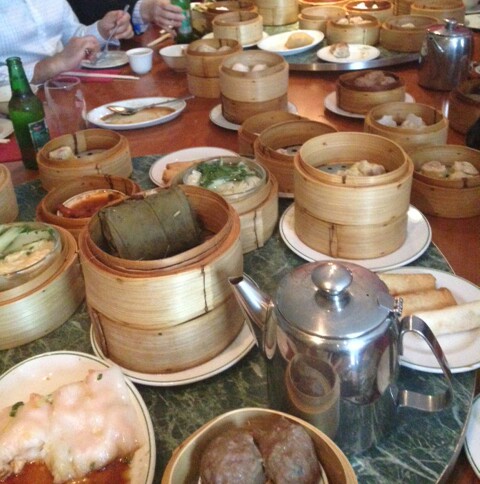 By way of explanation of the post title for readers located outside of Wales, “dim” is Welsh for no – with “dim problem” thus meaning “no problem”.

Explanation out of the way, it was Chinese New Year last Thursday (19/02) and to celebrate the Year of the Goat/Sheep we had a departmental outing to the Riverside Cantonese in Cardiff for a dim sum lunch.

I am usually a bit circumspect about dim sum as whilst I like to be adventurous, I also like to have at least some idea as to what I am going to get. Items on Chinese menus with descriptions which refer to just “meat”or “assorted meats” bring to mind the old adage that Chinese cusine encompasses anything with legs, bar from the table and chairs (http://m.travel.cnn.com/shanghai/life/5-extreme-foods-at-beijing-night-market-294439). The Chinese also tend to take nose to tail eating to the extreme and therefore dim sum can be a bit pot luck for the uninformed.

I am not particularly knowledgeable about dim sum, but was happily able to rely upon the knowledge of our current trainee who harks from Hong Kong and who guided all who attended in terms of what to order. On the basis of what we ended up ordering, it should perhaps have been the Year of the Pig rather than the Goat.

She persuaded me that chicken feet were one of the thing to go for being a, I was told, lovely delicacy not to be missed. Apparently the Chinese are mad for chicken feet, such that there is currently a shortage with a scramble to export them from countries (such as the UK) where they are simply a waste product.

The Riverside Cantonese is located a little way out of the centre of Cardiff – a good 10 minute walk from the city centre.

It is very unassuming on the outside and easily missed.

It has been ages since I last went to the place. A good 20 years I think and my dim recollection from then was it was decorated in a quite exuberant Cantonese style – pictures of dragons, limestone pinacles, pagoda, with lots of green and gold.

The decor now is very much more toned down. Bit boring if am honest and I found myself rather missing the old style.

I have heard rumours that they are moving from their current location to a bigger site in Canton. Whilst further out of town this will have the advantage of better parking (somewhat of a gripe currently it would seem from looking at Tripadviser).

The dim sum menu is split into various sections, with these being steamed 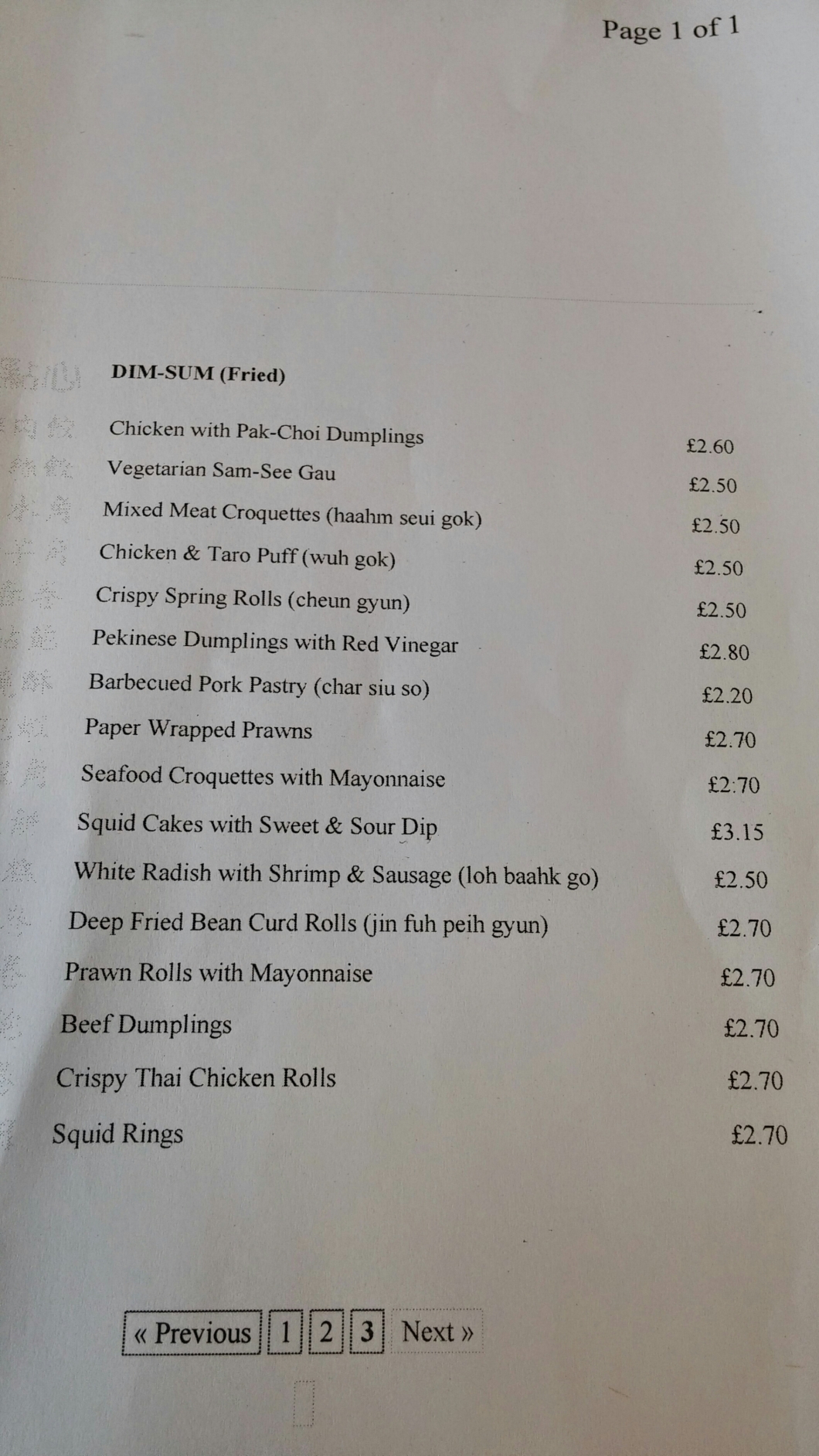 Price range from just over £2 to £3.70 and be aware when ordering that portion sizes are on the large side.

When the food started to arrive, I though gosh we seem to have ordered an awful lot and then it just kept on coming – plate after plate, steamer basket after steamer basket until the table was groaning under the weight of food. I am not convinced we ate more than was left on the table when we had all finally admitted defeat.

In all, between us, we ordered about 20 different types of dim sum. I have set out below my thoughts on a few of the ones I tried.

Forgot to take a picture of these but they were steamed rather than roasted buns which gave them a fluffy light texture and a pure white colour. The bun itself was slightly sweet with nice barbecued pork inside . Really good – I could have happily eaten more of these than would have been good for me. 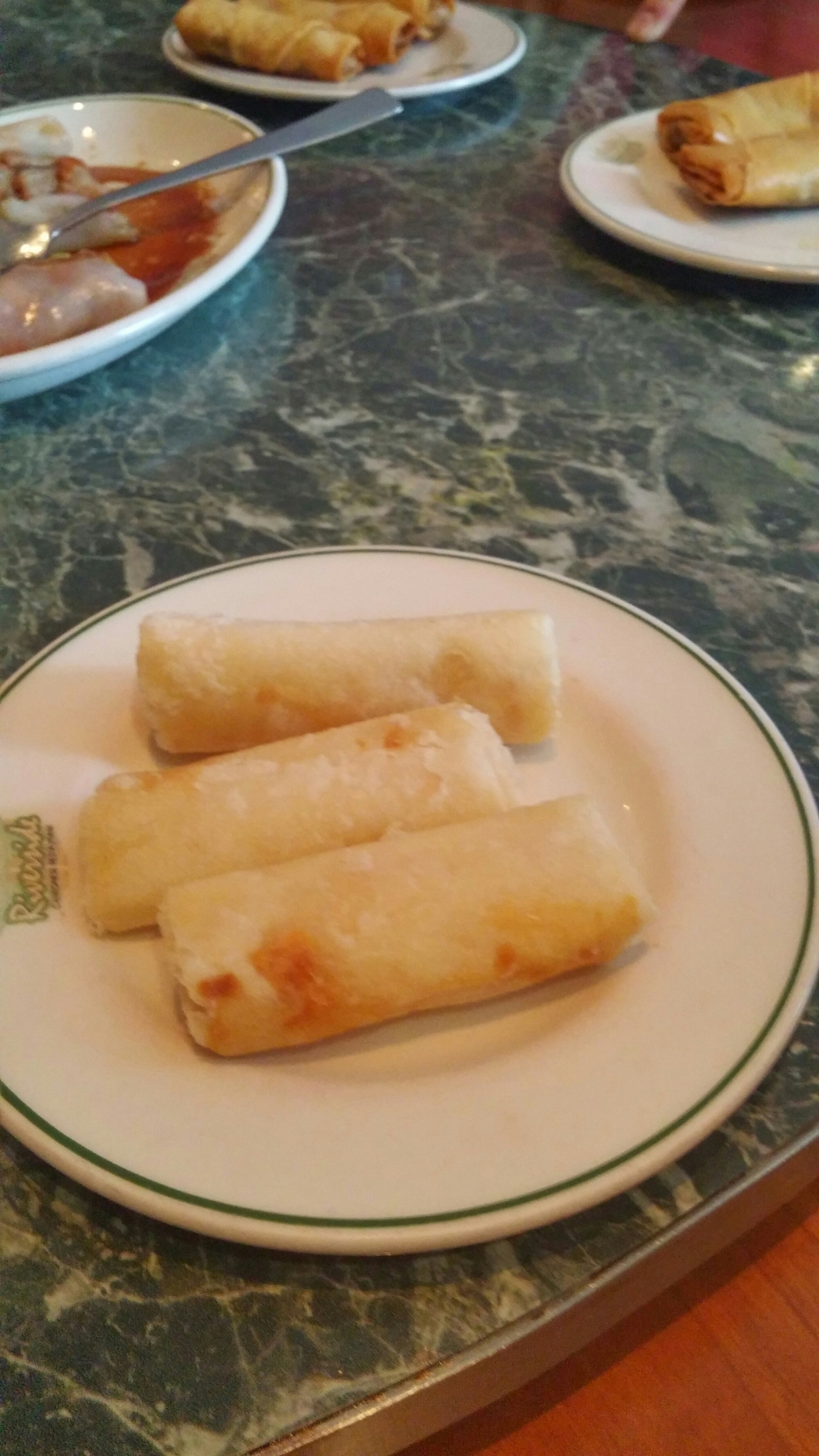 From the fried section, these were prawn filled cigar shaped rolls, with light as a feather and paper thin rice paper. Beautifully crisp with no hint of greasiness. Again very moreish 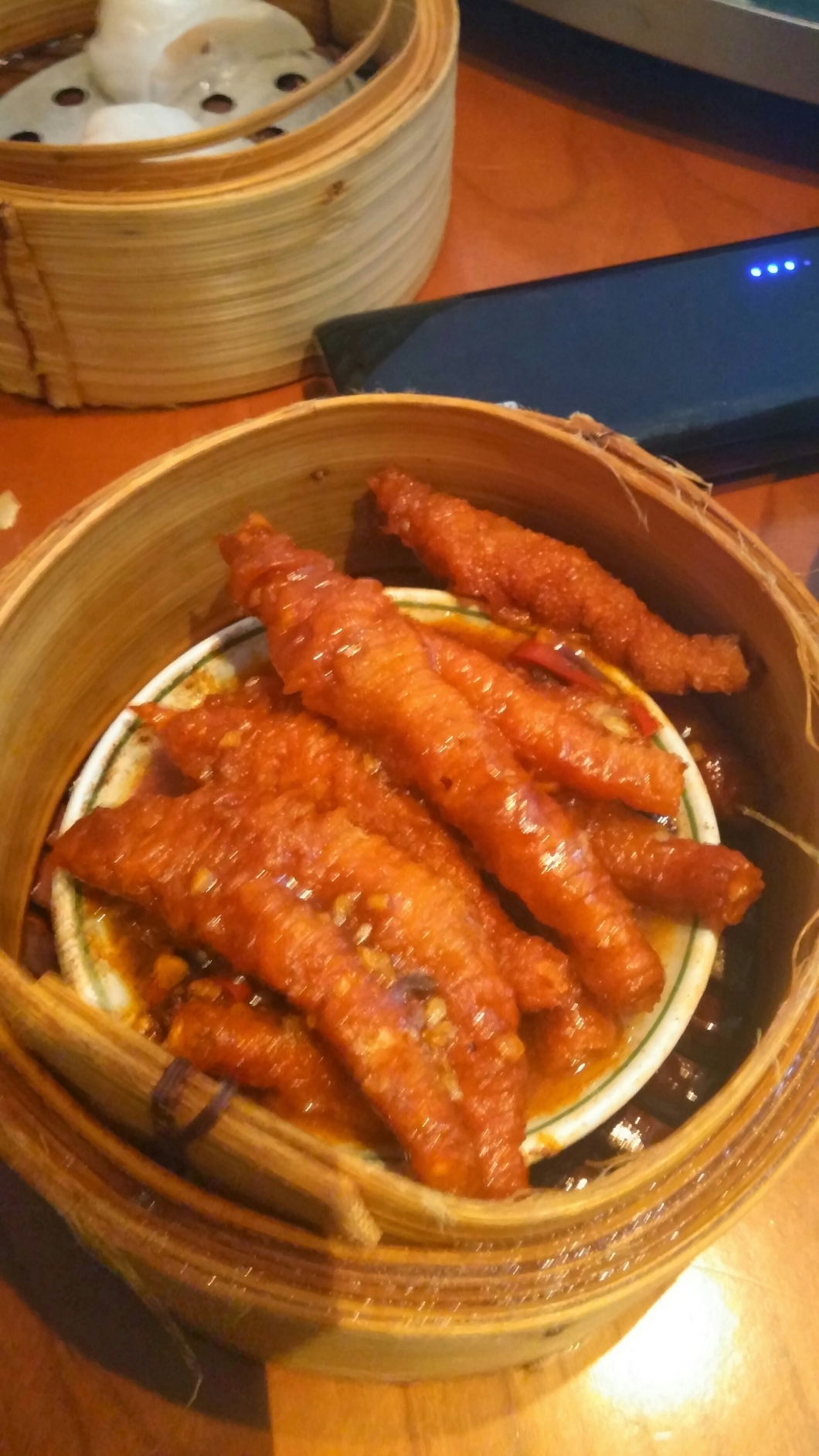 Interesting dish this. The feet are deep fried and then braised so what you don’t get is a crispy skin. You sort of nibble off the skin from the bone and cartilage with little or no meat on the feet. The skin is to me really pretty much just a vehicle for the black bean sauce which had an intense umami flavour to it. A quirky, but nice dish which resulted in lots of jokes along the lines of “go on try them, don’t be chicken”.

These are streamed rice noodle sheets which are wrapped around a filling (here barbecued pork in one and chicken and ginger in the other). The rice flour sheets (bit like lasagna) themselves had little, if any, flavour and were quite thin on the pork one. The sheets on the chicken and ginger ones were, however, a bit thick and gummy.

I was not really sold on these, if I am honest.

They were also buggers to pick up with chopsticks. Both fillings were nice, but all in all I preferred the pork one.

This sweet bun had a nice squigy texture and had a very “ooh errr Missus” look to them – as modelled by my friend Rachel.

The vanilla paste filling was a bit dull mind with not much vanilla flavour to it. Ok, but nothing to write home about.

Looking at the full list of what we ordered makes me slightly ashamed at what we attempted to eat and explains why I was still not hungry the next day, let alone in the evening.

It was a work day so no booze , but I did had a peek, before we went, at the wine list online and it is not bad at all with a decent selection of interesting stuff including some good Alsace wines (gerwurstraminar and riesling) that are a good match for Asian flavours.

The list also includes two Ribera del Duero wines from the very good producer A. Fernandez Pesquera , in the form of a Pesquera crianza and a reserva. There is a bit of a bargain to be had here in the form of the reserva. As the reserva retails (Fine Wines Direct UK – where this restaurant clearly get their wine – presume looking at 2008 vintage) at up around the £27 mark, the in restaurant price tag of £37 (only £3 more than the crianza on the list) represents a bit of a steal (a mark up over the retail price of about 37% – very low for the UK ). La Cha Cha in Cardiff Bay sells it for £59.95 – so the Riverside offering provides for a saving of £22.95 a bottle over that offered by La Cha Cha.

Accepting I don’t know the respective vintages on offer at La Cha Cha or the Riverside (irritatingly the year is not stated on either list but I would wager they are both the same – 2008), the Riverside price looks good value (for a UK restaurant wine list).

My visit was unfortunately on a work day so, tempting as the Pesquera Reserva was, I had to settle for a pot of Chinese tea. Apparently the thing to have with dim sum in any event.

Service was good, especially bearing in mind we were a very large table. They happily provided cartons and doggy bags to take the excess, of which there was a lot, back to the office for those who couldn’t make it.

Dim sum at the Riverside has to be one of the best value lunches in Cardiff.

We had veritable mountain of good quality, tasty food (we seriously over ordered) for £11 a head including drinks. Based on what we had left after we had all thoroughly stuffed our faces I think 2, max. 3, dim sum per person would be about right (especially if you are part of a decent size group and therefore can order a good variety) portion wise. On that basis you would be looking at £5 – £9 a head for more than enough food for lunch.

Would I got back? Oh yes – it would make for a great and very cheap alternative Sunday Iunch and I could then bag a bargain bottle of the Pesquera Reserva.